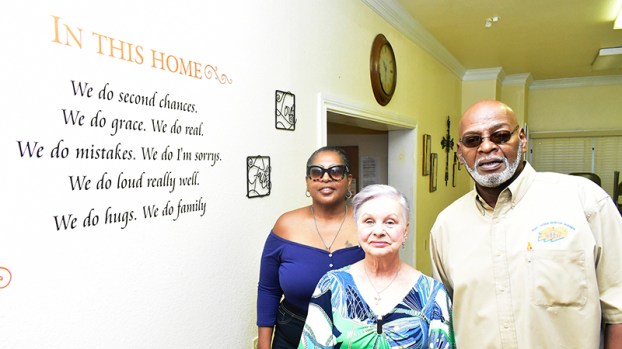 From left, Patricia Henderson, Doreen Hill and Ken Hill of the Port Cities Rescue Mission pose in the common area of the complex’s three-story home for women and families in downtown Port Arthur. (I.C. Murrell/The News) 10-24-19

Patricia Henderson understands firsthand the struggles with homelessness, and it’s not just because she’s volunteered as a Port Cities Rescue Mission caseworker for 13 years.

“It aggravates me to see people sleeping on the streets when we have places available, but we don’t have the funds,” Henderson, 60, said. “Working with people all these years, I became homeless after Hurricane Harvey. It does something to you.”

Henderson lived in one of the Port Cities Rescue Mission’s buildings for eight months while her home was being redone.

The mission is now accepting residents for the first time in three years. A loss of local and federal funding forced the mission to stop taking in new clients, according to executive director and Port Arthur native Ken Hill. 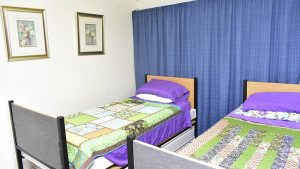 “You never miss your water until the well runs dry,” the 1976 Lincoln High School graduate said. “We take care of people exponentially. We take them on appointments. We get them clothes. My wife and I have put in money to keep it operable.”

Some residents rent from the Lighthouse Apartments I and II on the Port Cities campus in downtown Port Arthur. That has helped keep the mission operable. Port Arthur Mayor Thurman Bartie said in his first 100 days’ report Friday he is working to assist the mission.

“Churches do contribute and individuals as well,” Hill said.

James Babin and his mother Laura created Port Cities Rescue Mission in 1984 as a shelter for transient men, according to Hill. In 1996, it opened its doors to become a full-service homeless shelter.

“I realized I wasn’t making a difference,” Hill said. “The kids didn’t have a choice. They were under the criminal justice system. I wanted to be of service to people who understood loss, understood pain and frustration of drugs, alcohol, mental illness, domestic violence and ‘Life 101,’ because I had been down those roads.”

By his estimation, Port Cities helped 80,000 people since Hill’s arrival. Port Arthur recorded 63 homeless persons as of Sept. 20, all of them age 18 or older, including 39 males and 22 females (the genders for the other two were unknown), 13 chronically homeless and nine veterans. The statistics were taken in a Texas Balance of State Summer 2019 Point in Time count provided by the city. 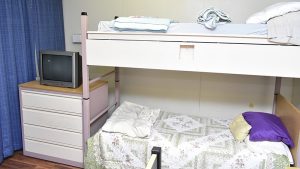 “We’re excited to help the community,” said Doreen Hill, Ken’s wife and director of operations for the mission. “Since we’ve been close, we’ve noticed a lot of people go homeless.”

The mission’s complex welcomes women and families with or without children and those with disabilities to its three-story center at 900 6th St. (which holds up to 300 people) and a men’s shelter at 530 Waco Ave (maximum 18). Whether the Hills can re-open another of the complex’s 12 buildings will depend on the gender breakdown and any other funding he can receive, Hill said.

“What we need for people is to contribute and volunteer,” Ken Hill said. “If you come to the mission to stay, whether you stay depends on your willingness to change. Those who come will be drug-tested, and those who don’t pass will not be discharged until they can pass a test.”

Port Cities is seeking more volunteers to assist with case management and looking for additional community support. The mission’s headquarters are located at 535 Atlanta Ave. and can be reached at 409-982-0202 or ken@pcrmm.org.

“We look forward to doing what we can do, but we need help from the community,” Doreen Hill said.