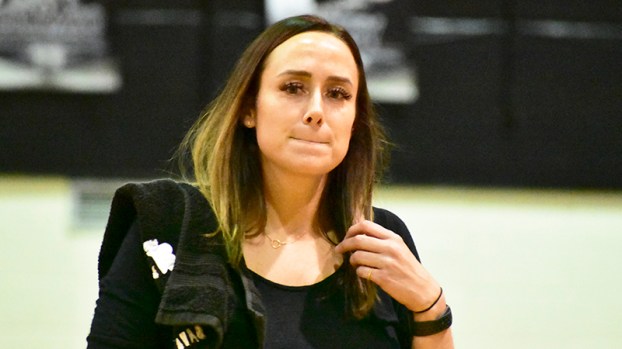 Nederland head volleyball coach Allie Crommett says while the Bulldogs have been consistently solid on defense, this season was perhaps the first time they had a great offense in years.

“We knew going into the season we were going to be the strongest we’ve been offensively in the last three or four years,” Crommett said. “We’ve always just had one good hitter or a handful. I think it’s been all-around the best team we’ve had in a while. For me, all the pieces of the puzzle were here.”

Nederland will play its first game in the playoffs against Texas City at 7 p.m. today (Nov. 5) at Liberty High School.

Bolstering that offense will be seniors Hannah Hickey, middle blocker, and Karley McGill, right side. Hickey and McGill have been playing for the varsity since they were sophomores and have become powerful players. McGill has gone two years as an All-District pick and Hickey was named All-District last year.

“When they were playing as sophomores they probably weren’t playing as strong, but they’ve gained the experience they needed in the last three years to just really come out right now and be explosive as offensive hitters,” Crommett said. “It just took them a while to develop, but now that they’re here they’re ready to go. That’s paired with some other sophomores that I have who are going to be the same way in a couple of years.”

The Bulldogs will face a Lady Stings squad that relies heavily on a particularly strong junior middle hitter, an area which the Bulldogs have had trouble reading in the past.

“If we can shut her down, we’ll probably fare pretty well against them,” Crommett said. “I had my coaches go scout them and I myself have seen them play in tournaments. They have a really, really strong middle and she’s a junior. And they have a couple of other hitters but they rely heavily on her. That’s going to be key for us, keeping the ball away from her and keeping it that way.”

Regardless of the outcome, Crommett sees a bright future for her team. She counts herself quite fortunate to have a substantial pool of talent to draw from the middle schools and freshman classes. She sees Nederland’s team going places in the coming years because of that.

“There’s a lot in the pipe coming up and I see the future’s going to be very strong and that’s exciting for our program,” she said. “The sky’s the limit for us. It’s just going to be who shows up next year fighting for spots because anybody could take a spot from anybody at this point.”

The winner of tonight’s match will go on face either Manvel or Madison in the area round later in the week.

NEDERLAND — Tickets went on sale for the Nederland vs. Port Neches-Groves football game at 7:30 a.m. today at the... read more