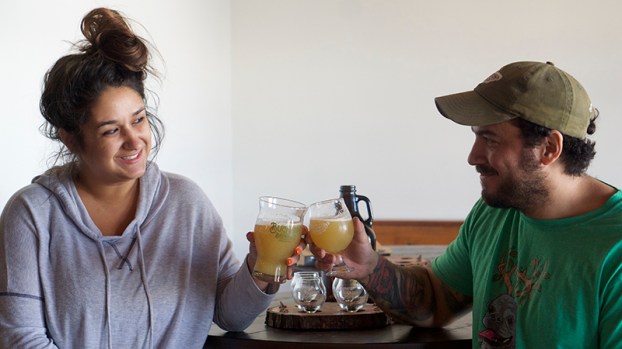 Beer true to style: Buckstin Brewing Co. to open in Nederland next month

NEDERLAND — Justin Buchanan-Lopez has been brewing craft beer in his home for more than a decade. Within the next month, he will open Buckstin Brewing Co. as he sees a long time dream finally come to fruition.

Lopez found his love for brewing early in life, starting his adventure in the depths of his mom’s kitchen before age 21. After taking a short break in college, Lopez and his wife Gabrielle Blanco finally decided it was time to get serious about opening their own local brewery.

“It got really serious about two years ago,” he said. “Gabbie went back to school to be a hairdresser and opened her own salon right across the street, and then she said it was my turn to go after my dream and open this place.”

Blanco, 27, co-owns Blanc Boutique and Salon on North 12th Street in Nederland, which she opened in June 2018. 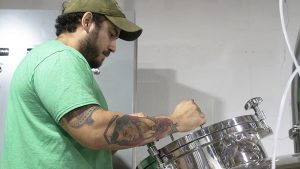 “We were both in jobs we weren’t happy with,” she said. “I was a teacher and he worked in the oilfield. It was just not our passions.

“We took a step back and thought about what would really make us happy. I wanted to go back and do hair and he was a really good brewer, so we started exploring our options. Here we are three years and four months later after our big decision, and everything is starting to take shape.”

Lopez, 30, said after they made the decision to go after the brewery he began making a timeline and a business plan. The first step included validating the product.

“When I make a style of beer, I’m almost obsessive about making it right,” he said. “So of course all my friends and family said they liked my beer, but it’s hard to get an honest opinion that someone wouldn’t lie to me. So I started sending my beers to competitions and they did really well.”

Lopez’s beer won a regional level of the National Home Brew Competition in 2017-18, the biggest worldwide competition for home brewers. 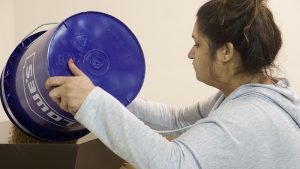 Gabrielle Blanco, co-owner of Buckstin Brewery, sifted through the hops and grains to begin the first batch of brewing. (Cassandra Jenkins/The News)

“It was good getting some feedback from professional judges,” he said. “Those made me feel like I could make beer on a professional level.”

Lopez traveled all over the world to see different brewing companies, try different hops and gain knowledge about the market. After attending the Craft Brewers Conference in 2017-18 he finally made the decision to begin his business plan.

“We knew from the beginning that we didn’t want to have any investors,” he said. “We wanted it to be all us, so it’s taken us a little bit longer, but we’re doing it the way we want to.”

With the help of his wife and co-owner of Buckstin Brewing Co., Lopez set out to find the perfect site for his brewery. Blanco, who had previous experience with the EDC and Nederland Chamber of Commerce, also reached out to the Small Business Association for help.

“To be on Boston Avenue has always been a dream, but nothing ever came available,” she said. “Finally, in February of this year we had a conference call with our SBA director and what she did was put out a back call to banks, investors and different types of funding and see who’s interested.

“We knew it was a huge risk for someone to gamble on these two kids asking for an insane amount of money, but within the hour we had four people that were interested. From that point, it has just been a snowball effect.” 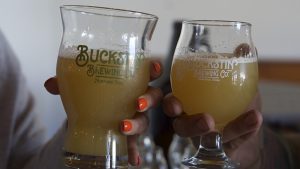 Buckstin Brewing Company gets its name from the combination of owner Justin and his late grandfather Buck. Justin Buchanan-Lopez and wife Gabrielle Blanco will open Buckstin Brewing Co. in Nederland next month. (Cassandra Jenkins/The News)

Since the purchasing of the building in March, the husband and wife duo have gutted the shop, torn down the walls and opened space in the back for the brewery to be visible to customers.

“We wanted it to be open so that every person who walks in here can see where the beer is made and how it’s made,” Blanco said. “We always say it’s the ultimate farm to table because we’re brewing the beer right there, we’re serving it right there and you sit down with your glass right here.”

“I like to tell people that we really do make a little of everything,” Lopez said. “We’ll only be serving our beer so I want to make sure we have a wide variety for everyone. I always say we’re more true to style. We stick to the classics.”

Buckstin Brewing Co. is set to open in December. An exact date has not been announced.

“It’s surreal, there are little things that make it feel real,” Blanco said. “[Thursday] we got a phone number and I was like, ‘Oh my gosh we have a phone number now!’ There are just little things like that. It’s so close we can taste it, but I know once we pour that first beer it will feel real.”

Buckstin Brewing Co. gets its name from the combination of owner Justin and his late grandfather Buck. The logo includes their rescue pug Nancy with bundles of hops hanging off its antlers to go along with the rustic feel of the brewery.