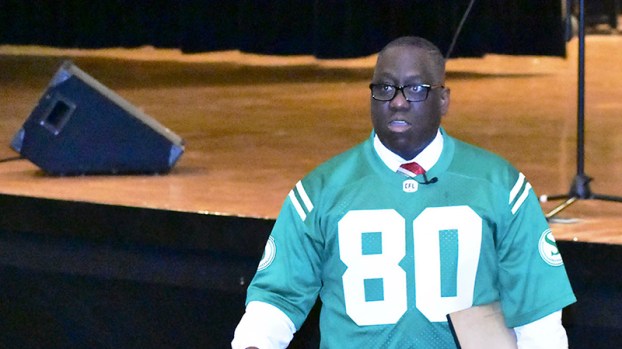 Don Narcisse, wearing his Saskatchewan Roughriders jersey during a Sept. 6 visit to Lincoln Middle School, will be inducted into the Museum of the Gulf Coast on Dec. 7. (I.C. Murrell/The News) 9-6-19

A dream of playing professional football that turned into reality has turned into more than what Don Narcisse dreamed in his younger days.

“This is better than being in the hall of fame in Canada, TSU [Texas Southern University] or whatever. This is big,” Narcisse said.

“This” thing Narcisse referred to is a spot in the Museum of the Gulf Coast in downtown Port Arthur. Narcisse will be inducted into the building’s Sports Hall of Fame in a ceremony from 2-4 p.m. Dec. 7.

“I’m just catching a blessing,” he said. “I ain’t dropping nothing.”

It will be another significant post-career honor for the 54-year-old Port Arthur native who starred 13 years in the Canadian Football League, all with the Saskatchewan Roughriders. Narcisse won a Grey Cup championship, Canada’s equivalent to a Super Bowl title, in 1989, and was inducted into the CFL Hall of Fame in 2010.

“This is something as a kid, I had that dream of playing professional football, and look at what hard work, having a good attitude and being on time have done,” Narcisse said. “You need those three ingredients.”

When Narcisse touches down downtown, it’ll come at a time when the Museum of the Gulf Coast is looking ahead to great changes.

“I’ve been working on how to reorganize to make room in the museum,” museum director Tom Neal said. “It hit us more acutely in the music area. … We’re going to update the music area by May 2020. I learned some things from that I’m going to use in the sports wing.”

Neal is looking to buy cases to store championship hardware such as medals and rings, and he plans to upgrade video kiosks that highlight the accomplishments of the 200-plus inductees from the 12- to 14-inch screens to 46 inches by May.

The museum was not in existence when Narcisse graduated from Lincoln High School in 1983. Before then, he was just a kid in the city who discovered a gift for catching passes.

“There was this guy named Aaron Reynolds who played at Lincoln,” Narcisse said. “He’s now a pastor. I was playing out in the street, he threw me a pass and I caught it with one hand. The other kids were saying, ‘Man, that Donald Ray can catch the ball.’ Little things like that turn out to where I am right now.”

From there, Narcisse became a college All-American at Texas Southern and caught at least one pass in each of his 216 CFL games.

A recent prostate cancer survivor, Narcisse resides in Manvel and works for Wells Fargo in Houston. Neal hopes Narcisse’s success helps the museum’s mission of inspiring the younger generation to be great.

“[The inductees] slept where these kids sleep and ate where kids eat today,” Neal said. “We want kids to understand the value systems these people did and work hard. They may not all end up here, but you will have a better life for adopting principles these people have demonstrated.”