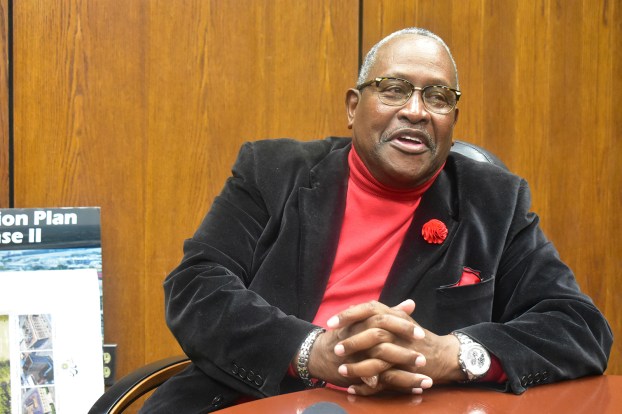 Port Arthur Mayor Thurman Bartie speaks with members of the local media while giving a report on his first 100 days in office Friday. (I.C. Murrell/The News)

In giving a report on his first 100 days as Port Arthur’s mayor, Thurman Bartie said he’d like to gain clarification on the rules the Texas General Land Office enforced in approving applicants for its Homeowner Reimbursement Program.

The General Land Office has said it uses rules from the U.S. Department of Housing and Urban Development, which provides federal funds to be distributed through the program.

But there’s been a growing concern over an unspecified number of Port Arthur residents who have been turned down, and Bartie suggested the rules the GLO used do not correlate with original requirements it gave.

“I had worked in disaster recovery prior to becoming mayor, and several things were said — I didn’t see the documents as far as reimbursement and things of that nature — like if they did A, B and C, reimbursement was there for them. This is how it was explained to several citizens. My heart goes out to those individuals who use money from other sources and did some things to bring their homes back to a livable standard, yet maybe they didn’t put their house on stilts. Maybe they didn’t elevate it 3 feet. It’s hard to elevate a home that’s on a slab 3 feet. It’s difficult to even elevate one that’s on 12-inch spheres. This is going to take some legislation to get some things done.”

Bartie offered his reaction at city hall Friday while giving a report on his first 100 days as mayor. He took office July 3 after winning a runoff election against incumbent Derrick Freeman on June 22, with the 100th day landing on Oct. 11.

Brittany Eck, GLO director of communications for community development and revitalization, said a change was made to make it easier for applicants to demonstrate the repairs made in order to increase reimbursement amount and speed up the eligibility process.

She said it had nothing to do with HUD’s floodplain rules and requirements, a separate eligibility issue that was stated in the original press release announcing the program. Rules regarding eligibility were included in a Feb. 23 story about the program’s start in The News.

Bartie also highlighted a number of accomplishments so far as mayor. He named as his top achievements, in no particular order, establishing dialogue with Texas Gov. Greg Abbott, hosting a roundtable discussion Oct. 1 with representatives from educational entities and industrial partners in Port Arthur in devising a plan to educate and certify students in local industries, working with risk management personnel and seeing the results of their work amid the impact of Tropical Storm Imelda in September, and meeting with citizens and working with interim city manager Ron Burton to address common issues the city faces including crime and the conditions of roads.

Port Arthur sustained minimal, if any, damage to businesses and homes during Imelda.

“I consider that a blessing for sure,” Bartie said. “It also gave me a workout, so to speak, because one of these times, it’s going to come to be not as nice as Imelda, but at least I will have that experience.”

The mayor said Port Arthur is better off than it was when he took office.

“What I think we’re going to be bring to Port Arthur in the future has totally enhanced Port Arthur,” he said. “Folks can’t see it right now, and I’m not at liberty just to speak about it right now, but I know for a fact within the next 100 days, or 300 for sure, those changes will be evident.”

A dream of playing professional football that turned into reality has turned into more than what Don Narcisse dreamed in... read more