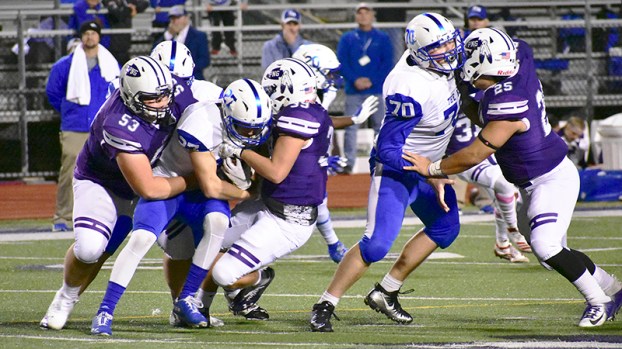 Donald Kinney (53) and Caison Denzlinger (39) of PNG stuff a Barbers Hill runner in the second half Friday in Port Neches. (I.C. Murrell/The News) 11-1-19

PORT NECHES — The Port Neches-Groves Indians and Barbers Hill Eagles made it an offensive contest, with nearly all possessions ending in touchdowns Friday night.

Barbers Hill ultimately came out on top and remained undefeated in district play, beating PNG 40-35 for at least a share of the District 12-5A Division II championship. 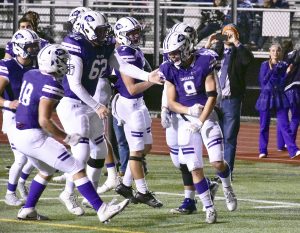 The Indians and the Eagles exchanged scoring drives throughout the first half, as six of the eight series ended in touchdowns. The Indians got things started with a 70-yard drive that ended with a 6-yard run by quarterback Blake Bost for the first touchdown, despite suffering several losses from three sacks.

The Eagles responded with their own 60-yard drive finishing with quarterback Christian Kaopua connecting with Cameron Cauley on a 20-yard pass for their own first touchdown.

The Indians and Eagles scored again on both of their next possessions. From the 10-yard line, Bost handed the ball to Kaleb Wuenschel, who passed to Ryan Sosa for the touchdown. The Eagles, likewise, responded again with a 4-yard run by Kaopua for a touchdown at the end of a 66-yard drive with 7:09 left in the second quarter.

Both teams were flagged for personal fouls that brought the Indians from 1 yard away from scoring to the Eagles’ 16, then back half the distance to the goal to the 8. Wuenschel caught an 8-yard pass for the third PNG score.

Barbers Hill had its turn to score again with 1:56 left in the half from a 3-yard run by Kaopua, but the Eagles’ prospects were threatened when Alvaro Garcia failed to make the extra point.

PNG’s lead didn’t last long. Their first stopped drive ended when Tate Sandell, attempting to punt, lost control of the ball while in his own end zone. Barbers Hill recovered to take the lead for the first time 27-20 as the half ended. 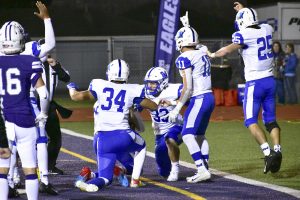 PNG came back with a 68-yard drive ended by a 21-yard TD pass to Zane Hernandez. The Indians tried to recover an onside kick but the ball didn’t travel far enough, putting Barbers Hill in great field position at the Indians’ 42. A 30-yard pass to Cauley from Kaopua brought the score to 40-28 with 1:22 left in the third quarter.

PNG brought the game within its grasp, trailing 40-35 in the fourth after a 78-yard drive that ended on an easy 2-yard touchdown pass to Brady Nail.

PNG was only one possession away from taking the lead again with 8:25 left in the fourth quarter, and the Indians had extraordinary opportunities to do so. On a Barbers Hill possession at the Indians’ 13, the PNG defense forced Kaopua to fumble and linebacker Donovan Bergeron recovered to take possession with 2:22 left. The Indians made it down to the Eagles’ 47, only to be intercepted by defensive back Ashton Hamby. The Eagles took the remaining 1:53 to run out the clock.

Bergeron recovered a fumble, giving the Indians their last chance to make up the five-point difference and win the game. The game changed again after Bost’s pass was intercepted by Hamby, and Barbers Hill took their hard-fought victory.

The Game Ball Goes to …

Bergeron for making the important play at the 11th hour.

Madness will descend upon Mid-County as PNG and Nederland (4-4, 4-1 before Friday’s game against Crosby) end their regular seasons fighting for the Bum Phillips Bowl Trophy with their annual rivalry game at 7:30 p.m. Oct. 8 at Bulldog Stadium.

The Port Neches-Groves Indians, reliant on the aerial talents of its quarterback and receivers, will need to find ways around... read more