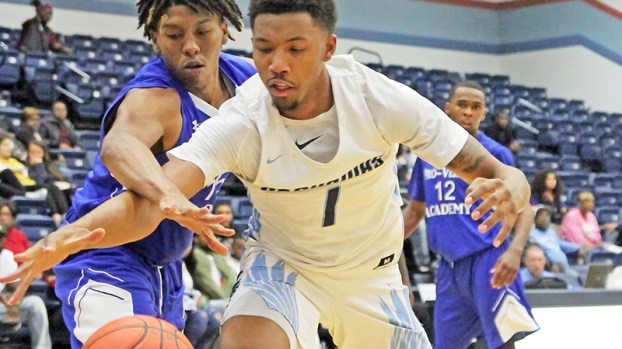 The 6-foot-7 Thomas, who averaged 11 points and five rebounds a game last season, scored 21 points and pulled four rebounds against the Houstonians.

The Seahawks outshot the Houstonians 46.7 percent to 27.9 percent and outrebounded them 50-28. LSPCA freshman Xavier Thomas led his team with six boards and teammates Justice Vaughn and Kanntrell Burney each were credited with five rebounds.

Point guard Isaiah Arceneaux led UpTempo with 14 and was the only double-digit scorer on his team. Jase Hickey had a game-high six rebounds.

“We played hard, with a lot of energy,” Seahawks coach Lance Madison said. “We had a lot of guys contribute. It was a good team effort.”

A boisterous crowd was in the house Friday, which was the end of the school’s Spirit Week. The Student Activities department hosted a pre-game tailgate.

“The people were really loud,” Madison said. “The Student Activities did a great job. Spirit Week was fun.”

The head coach was impressed with what he saw from Jones, a transfer who sat out last year while beefing up for the toughest junior college conference in the land.

“I think he played with a lot of poise. He scored it on the block. He had some offensive putbacks and he went to the line and made his foul shots,” the coach said.

Jones was 4 for 7 from the field and 7 of 8 from the free throw line. The 6-foot-7 Brooks, who played at Howard College last year, scored the Seahawks’ first nine points in the first half and five of the first seven in the second half; he was 5 for 5 from the line.

“Devaughn Thomas is a sophomore who had a good year for us last year and made some big-time plays. J’Son Brooks played a good game also.

“I thought overall our defense was good for this time of year. We did a good job rebounding, too.”

The Seahawks entertain Lone Star College-Cy Fair at the Parker Center at 6 p.m. Tuesday night. Then they travel next weekend to Lewisville to play nationally ranked Clarendon College and South Plains College in the Texas East vs. West Challenge.

“We’ve got to come out with the same type of energy and effort, stay focused and value the ball,” Madison said.

Thomas and Jones each lit the lights for 11 points as the Seahawks raced out to a 44-23 halftime lead.

They doubled-up UpTempo with a free throw by Thomas making it 30-15 with about 8 minutes left in the first half.

While Thomas had a team-high four field goals (one a 3-pointer) in the first half, he hit only 2 of 7 from the free throw line. Jones was 7 for 8 from the line with a couple of two-point baskets.

Bulldogs fighting for playoffs, but Crosby will be too on Friday

The Crosby Cougars had a taste of a three-game winning streak until Barbers Hill ended it last Friday, defeating them... read more