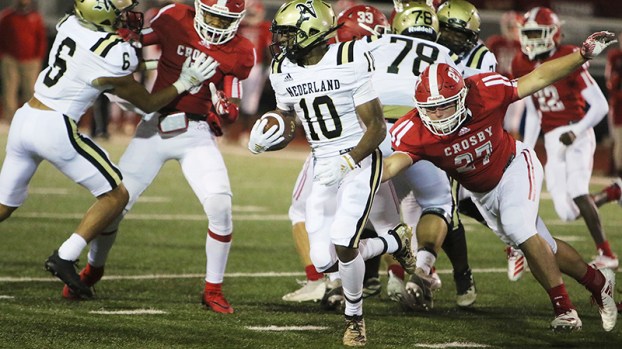 Nederland junior Josh Mazyck carries the ball against Crosby on Friday in Crosby. (Michael Sudhalter/Special to The News) 11-1-19

CROSBY — In a game that had more twist and turns than a winding country road, the Crosby Cougars claimed a 36-29 win in double overtime over the visiting Nederland Bulldogs in a District 12-5A-II game on Friday night. 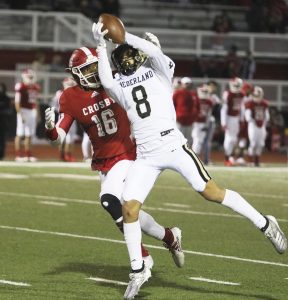 Nederland sophomore Kyndon Fuselier makes a big catch in the first half with Crosby senior Marcus Jnofinn covering him Friday. (Michael Sudhalter/Special to The News) 11-1-19

Crosby dominated the first half, building a 16-0 lead at the break, only to see Nederland score 21 unanswered points in the third quarter as the Bulldogs led 21-16 heading into the final period. Nederland failed to capitalize on a Crosby turnover on the first play of the fourth quarter. That opened the door for the Cougars, who capitalized to take the lead for good on a 64-yard TD pass from Reggie Branch to Jalen Herman with 9:07 remaining. Crosby increased its lead to 29-21 only to have Nederland score with 17.5 seconds remaining in the fourth quarter to tie the game at 29 to send the game into overtime.

Crosby took a 7-0 lead with 4:28 remaining in the first quarter when quarterback Reggie Branch hit Deniquez Dunn in the left corner of the end zone for a 9-yard touchdown pass. That came one play after the Cougars elected to take a field goal off the board after Nederland was assessed a personal foul for jumping over the center on the field-goal attempt. 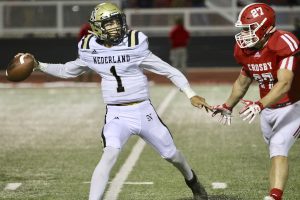 Crosby made it 13-0 just 31 seconds into the second quarter when wide receiver Jalen Herman connected with Dunn for a 47-yard scoring pass on a flea flicker. Crosby boosted its lead to 16-0 with 53 seconds remaining in the half on a 27-yard field goal by Trevor Helburg.

The third quarter was all Nederland, thanks in large part to running back Josh Mazyck, who keyed the offense, highlighted by a 37-yard TD run with 7:58 remaining in the third quarter to cut the Crosby lead to 16-7. Nederland would score two more TDs in the quarter, a 7-yard scoring strike from Bryce McMorris to Bryson Garrett and a 1-yard sneak by McMorris as the Bulldogs led 21-16 after three quarters.

The Bulldogs appeared poised to break the game open when Kyndon Fuselier picked off Branch on the first play of the fourth quarter, giving Nederland the ball at the Crosby 21, but the Bulldogs could not capitalize. Crosby took the lead at 22-21 when Herman scored on a 64-yard pass from Branch with 9:07 left. Crosby seemed to salt the game away when Branch scored on a 4-yard run with 1:31 left to make it 29-21, but McMorris engineered a drive down the field in the final minute, capping it with a 31-yard TD pass to Bryson Garrett with 17.5 seconds remaining in regulation. McMorris linked up with Garrett for the two-point conversion to tie the game at 29.

Both teams failed on field-goal attempts in the first overtime before Crosby scored in the second overtime on a 25-yard pass from Branch to Jeremiah Patterson. McMorris couldn’t continue his magic, as his fourth-down pass into the end zone fell incomplete, setting off a joyous celebration on the Crosby sidelines.

On several different occasions, the last when McMorris engineered a last-minute drive to send the game into overtime with his 31-yard TD pass to Rene Cunningham.

Mazyck, who had 123 yards and one TD for the Bulldogs. Honorable mention to Rene Cunningham, who caught the 31-yard TD pass in the final seconds to send the game into overtime.

The Bulldogs close the regular season when they host Port Neches-Groves in the annual Bum Phillips Bowl at 7:30 p.m. Nov. 8 at Bulldog Stadium. After that, it’s the postseason.

PORT NECHES — The Port Neches-Groves Indians and Barbers Hill Eagles made it an offensive contest, with nearly all possessions... read more