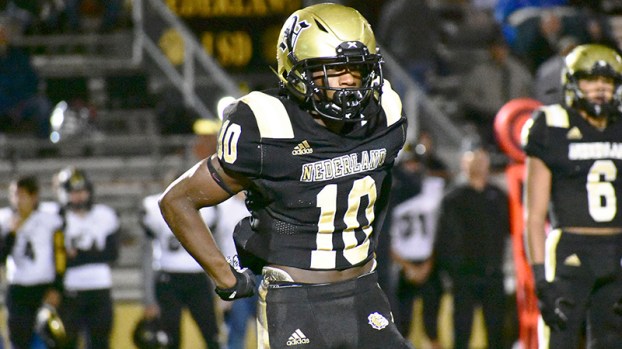 It was Senior Night in Bulldog Stadium and Nederland was hungry for its first win at home.

That’s what was going through junior Josh Mazyck’s mind when the Bulldogs were down 6-3 against Vidor with only 2:46 left in the game.

“I was just thinking about the seniors and about how I had to get it in for them for our first home game win,” Mazyck said.

Quarterback Bryce McMorris and wide receiver Kyndon Fuselier, both seniors, might have had the same thoughts. Two passes by them for 41 yards set the Bulldogs up at the 4-yard line to let Mazyck take the ball the rest of the way and score the winning touchdown.

“There was a guy sitting there in the hole and Josh just kind of went under him, got turned around and backed into the end zone,” head coach Monte Barrow recalled.

Mazyck and the offense had trouble finding ways past the tough Vidor defense, but plays came together at the 11th hour to put Nederland on top 10-6.

Making plays as a running back and a wide receiver is what allows Mazyck to give the Bulldogs flexibility to move the ball.

“He excels at it,” Barrow said of Mazyck’s versatility. “He’s got great speed, he’s got great hands. He’s had to work at his route running and has put the time in there. We look at that as a plus on the offense.

“He’s a very good receiver, a lot times last week when we went to a four-wide we’d keep him as the running back in the back field. He allows us freedom in different things he can do being a runner and a receiver.”

Mazyck prefers being running back, though. He sits at third in the district for number of yards gained rushing, behind Vidor’s Brad Nunez and Crosby’s Deniquez Dunn, while only Baytown Lee’s Ijenea Wooley has scored more rushing touchdowns than him. Mazyck has 645 yards racked up this season so far on 114 carries, along with eight touchdowns. With receiving, he’s caught 21 passes for 123 yards.

The coaches and the players know they can trust Mazyck with the ball. He was responsible for 77 of the 159 yards the Nederland offense was able to squeeze out of District 12-5A-II’s top defense last Friday. Mazyck had 19 carries that night for 67 yards as well as two catches for 10 yards.

“He would have had a lot more than that if we’d been more successful and made more first downs — we had a lot of three-and-outs,” Barrow said. “But we’re going to put the ball in Josh’s hands because he can score at any time. He can turn a good play into a great play and turn a bad play into a good play.

“He uses his speed. The guys that see it for the first time usually take him at the wrong angle because of how quick he can get around the corner.”

Going into a game against Crosby on Friday, the weather forecast is predicting a cold night. That isn’t going to bother Mazyck.

“We can’t let that faze us,” he said. “We’ve got to come out there and do what we’ve been doing for the last couple of games that we’ve been winning and keep building on that so we can end the season right.”