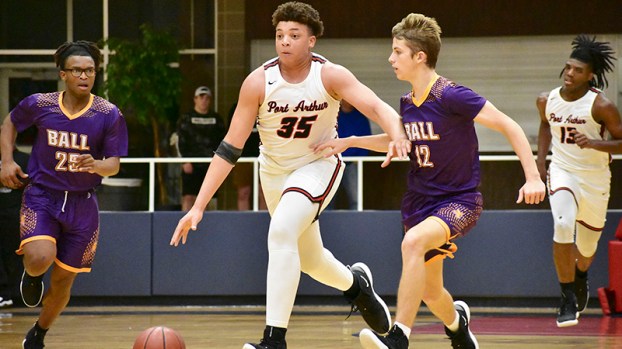 Kenneth Lofton Jr. is hoping to push the Memorial Titans back to the top of Class 5A in basketball. (I.C. Murrell/The News) 2-19-19

The Memorial Titans have a reputation to defend.

They won the 5A state championship in 2018 and made it to the Region III semifinals earlier this year on a record of 27-8 overall and 11-1 in District 21-5A.

Alden Lewis, in his second season as head coach, sees the team coming together for their ultimate goal: to win the state championship again.

The Texas Association of Basketball Coaches also sees promise in this year’s team, ranking the Titans sixth in 5A for its preseason and picking them finishing first again in District 21-5A.

What Lewis likes most about his team: “The belief and trust that the players have in each other from summer workouts to now, which is very important if you want to be successful.”

The Titans will have to overcome losing several seniors from last season and get the newcomers ready to compete at the varsity level.

“It’s going to take being able to defend at a high level every night, also executing on both ends of the floor,” Lewis said. “Building that team chemistry and leadership will ultimately help us get to our ultimate goal.”

“We have some veteran players that had good summers that we will look to help guide us this season,” Lewis said.

The Titans will play two scrimmages, one at Summer Creek at 10 a.m. on Nov. 9 and one at Baytown Lee at 6 p.m. on Nov. 12. They will begin their season at Aldine Campbell against Westbury Christian on Nov. 16 at 2 p.m.

The Bulldogs, with no seniors on the team last year, made it to face Friendswood in the playoffs but were... read more