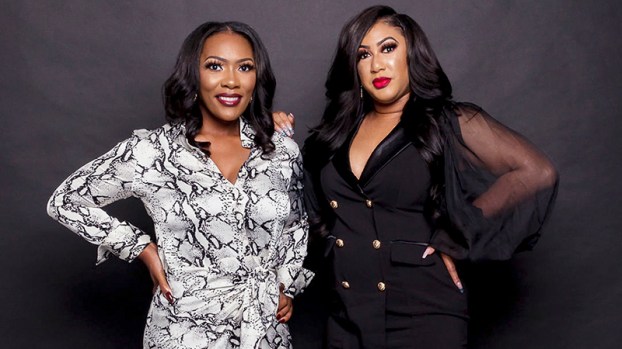 Lechanda Wiltz, left, and Tieranny Decuir are opening their new storefront, Too Much Hair Collection and Girl Code Shoetique, at 1 p.m. on Saturday. (Courtesy photo)

Tieranny Decuir and Lechanda Wiltz are a power duo. The Port Arthur natives are teaming up to be a motivation and inspiration to the female African American community through beauty, business and brains.

Decuir, 27, and Wiltz, 34, have combined their existing online stores, Too Much Hair Collection and Girl Code Shoetique, to provide a one-stop shop storefront in Port Arthur for every need from hair and lashes to clothes and shoes.

The combined store is located at 3708 Gulfway Drive, Suite A. After its grand opening, the store will be open from 10 a.m. to 7 p.m. Tuesday-Saturday.

Decuir started out her online hair business, Too Much Luxury Hair, in 2015 while she was attending Lamar University to obtain her bachelor’s in criminal justice.

“It all started when my dad said I should try to sell hair, because I spend so much money on my hair already,” she said. “He told me, ‘You need to try to get it,’ and I know he was joking but when he said that, I was like ‘why not?’ I was already buying hair from somewhere in Houston, so I emailed the owner on how she got started. She charged me, but she did help me and it just took off from there.”

After graduating from Lamar, Decuir was hired at child protection services where she worked for three years before quitting to focus on her business. As it grew, Decuir rebranded this year and changed the name from Too Much Luxury Hair to Too Much Hair Collection, adding lashes, wax, applications and more.

Decuir said she took a job as a permanent substitute teacher at Memorial High School to allow her business to grow before deciding to look for a permanent storefront in Port Arthur.

“I started looking around this year, but didn’t find anything I really liked until I went to Ms. Tat, a local woman who owns a lot of real estate out here,” she said. “She showed me this space and I fell in love with it.”

Decuir contacted her cousin, owner of Girl Code Shoetique, about partnering up to provide both products in the new store. Wiltz said yes.

“When Tieranny came to me and said she found this building, I said if you like it I want in,” Wiltz said. “I threw myself into it, but it worked better for both of us. We just got so excited. We thought it would be better for us to come together as one than try it separately.”

Wiltz said it was always her dream to have her own online shoe store. She launched her website in June.

“I follow a lot of entrepreneurs on social media and there is this lady I follow in Houston,” she said. “She was hosting an online mentorship program. I joined that and took in as much as I could. When I felt like I was finally financially able to kickoff my business without taking out loans, I launched it. That’s how it all started.”

Wiltz, a single mother of two, started her own business because she wanted to be an inspiration to her children and the young girls of the community.

“I wanted to show my children that you can use your environment for motivation,” she said. “I’ve been a single parent most of my adulthood and I didn’t want my children to think they had to find a job and be complacent. I want them to follow their dreams and I want to be an inspiration and motivation to the girls out here, too.”

Too Much Hair Collection and Girl Code Shoetique will have a grand opening at 1 p.m. Saturday (Nov. 2). They will launch never-before-seen products and the first 50 guests to arrive receive a complimentary gift bag.

Decuir and Wiltz said they want to encourage the community to come out and support young women and an African American-owned business.

“The main thing that makes it unique is that it is a one-stop shop,” Decuir said. “I’ve never been able to go somewhere and get hair and lashes and then go to the other side of the store and get a jumpsuit and shoes to match. We’re a one-stop shop and we have quality.”

For more information or to view products, visit toomuchhair.net and girlcodeshoetique.com.

During Luis Figueroa’s two decade-plus career in the local refinery industry, he noticed many of his coworkers had trouble finding... read more