Downtown vision taking shape: Motiva’s aggressive plans could have workers in place by 2020 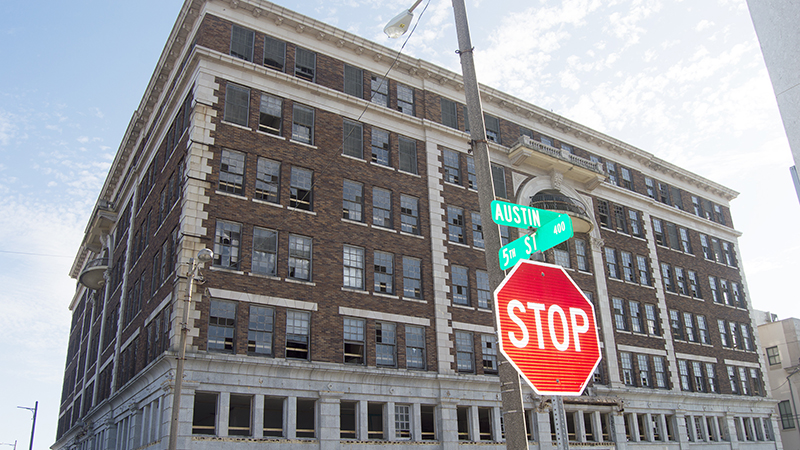 When renovated, the bottom floor of the Adams Building will be available for outside commercial interests, who would own businesses like restaurants or dry cleaners to service the influx of office professionals. (Stephen Hemelt/The News)

As a new-to-this-area employee at Total in Port Arthur, Pat Avery remembers when an operator came to her years ago and said, “Pat, do you have a minute? I want to take you somewhere.”

The man drove Avery to Downtown Port Arthur and said, “When I was a little boy, this was the most vibrant, beautiful place you could ever want to live. Can’t you all in the refining industry and petrochemicals do something to restore our city?”

Avery, who retired from Total and now leads the Greater Port Arthur Chamber of Commerce, said she is “so glad” to see a day where that question has been answered.

“Downtown, thanks to Port Arthur, thanks to our city for negotiating, is going to have a revitalization that is going to be terrific,” she said. “Thank you so much for believing in our city.”

Avery shared that story during the chamber’s membership luncheon, which followed a presentation from Motiva about downtown development. 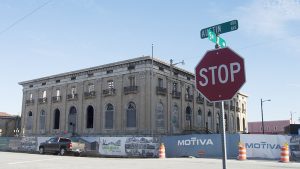 The Federal Building is part of the National Register of Historic Places, and Motiva officials said demolition and abatement work at the location is almost complete. (Stephen Hemelt/The News)

“Face of this city”

Motiva’s goal is to change the face of Downtown Port Arthur.

Those eager for updates and interested in seeing the process in action can turn their attention to the Adams Building at 440 Austin Avenue.

Jay Hall, Motiva deals manager, said demolition and abatement work on the building began last week, which coincides with efforts to get the structure listed on the National Register of Historic Places.

“Our anticipation is if we get our process done quickly, we will have our historical permits in before (the end of March),” Hall said.

Motiva closed on the purchases of the Adams Building and the equally weathered Federal Building in May with plans for a full-scale renovation.

That work will eventually lead to the transfer of hundreds of “non-operation personnel” from Motiva’s refinery location to Downtown Port Arthur.

“At any given time we have about 250 operation trailers with personnel inside the refinery gate,” Hall said. “That is a very poor use of real estate, when I can actually move those non-operation personnel into a facility that is just a short drive away. Then I can put revenue-generating assets into those (refinery) spaces.”

The Federal Building is already part of the National Register of Historic Places, and Hall said demolition and abatement work at that location is almost complete.

Motiva officials hope to utilize that space for a conference center, a location that could be operational in 12 months.

“That’s a stretch goal; it’s a fast goal, but we want to get going,” Hall said.

The Adams Building will function as an office location.

The bottom floor of the structure would be used for outside commercial interests, who would own businesses like restaurants or dry cleaners to service the influx of office professionals.

That’s enough space to house approximately 500 office workers in buildings that will be composed of approximately 80 percent workstations and 20 percent offices.

“Those buildings are absolutely amazing pieces of architecture,” Hall said. “My company has given me the opportunity to actually work on a project that is literally going to change the face of this city, and we hope will be the catalyst for the next wave.

“This is home for Motiva. This is where our largest refinery asset is. This is the hub of one of our key pieces of business.” 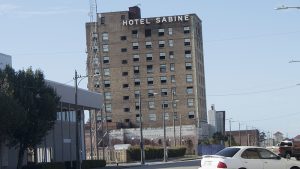 Motiva officials and the City of Port Arthur are still in negotiations to sell Hotel Sabine to the energy giant. (Stephen Hemelt/The News)

Motiva remains in negotiations with the City of Port Arthur to purchase Hotel Sabine.

“That is one of our initiatives that we are working on,” Hall said. “That has a long-term strategic plan for us. We have not concluded our negotiations, but we are continuing to work on it.”

The transaction was expected by some to be completed in August, but Federal Aviation Administration regulations slowed the sale.

The price was set at $400,000 for the 10-story, 1929 hotel and for five tracts of parking space. City planners have said Motiva may renovate the hotel for short-term residences for company visitors.

However, a non-consent item on the City Council’s agenda to “enter into a sale-and-purchase agreement” was tabled in August and not much has been shared publicly since.

The FAA cautioned the city not to make the sale pending resolution of an FAA tower located on the sale property. It is unknown if that is still a stumbling block in negotiations.

Motiva has also purchased the A.E. Scott Furniture Building from private hands as part of its effort to create a Downtown headquarters.

The influx of hundreds of Motiva employees and feeder jobs from business developments to service that personnel is going to bring significantly more vehicles to the normally quiet area at the intersection of Austin Avenue and Fifth Street.

Company officials do not believe enough street parking exists to accommodate all needs, which had led to a study to develop potential solutions.

Motiva is working with several individual owners of vacant lots, as well as the city for its lots, to purchase land for a possible multi-tiered garage.

“We will try to take as much of the parking off the streets as we can,” Hall said, adding it is Motiva’s goal “not to congest the city with street parking.”

Hall said the Downtown project is the most complicated and interesting thing he has ever worked on.

“I’m honored to do this for Motiva, the city and community; we thank you,” Hall said to attendees at this week’s Greater Port Arthur Chamber of Commerce luncheon. “Every day we make headway on this and start to see that vision come out. We encourage the enthusiasm; we embrace it. We are in exciting times in Port Arthur and looking to the next steps.”