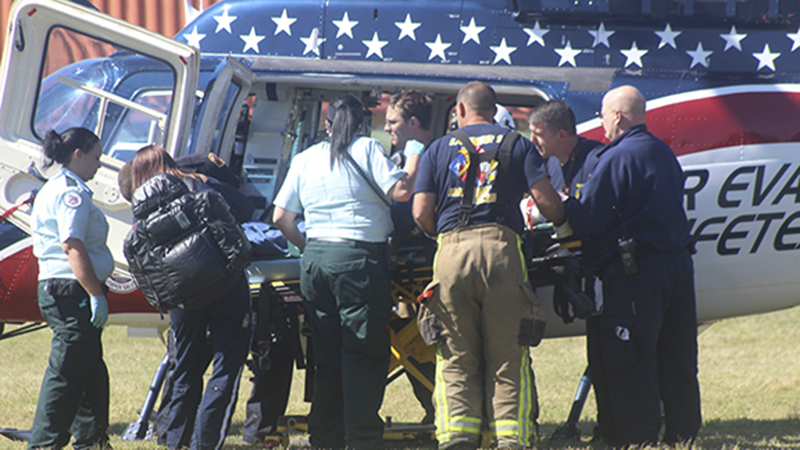 Emergency personnel with Acadian Ambulance and the Port Arthur Fire Department carry an injured man into a medical evacuation helicopter after the man was injured on a construction site near the Medical Center of Southeast Texas on Wednesday. (Arthur Robinson/Special to The News) 10-23-19

A construction worker was life-flighted this week while working on a construction site near the Medical Center of Southeast Texas off of Jimmy Johnson Boulevard.

The Port Arthur Fire Department arrived on scene Wednesday in time to extract the man from where he was covered in the ditch, after the side of a trench wall collapsed in on him during a routine workday.

Port Arthur Battalion Chief Jeremy Holland and Fire Chief Larry Richard said the man was extracted from under the dirt and flown to Galveston via life flight for potentially life-threatening issues.

Richard said when he arrived on scene, the man had already been dug out from the portion of the trench wall that fell.

“It took him a few minutes to get extracted,” he said. “Our guys got there before I got there and helped get him out. The fire department had an excellent response and was able to get him out very quick. It was definitely a life-threatening situation that he was in.”

Exact reasons why the trench fell are unknown, though it was possibly due to wet and loose ground, according to the Port Arthur Fire Department.

Richard said the man was responsive when hoisted into the helicopter, but his condition has not been updated nor has he been identified at this time.

Calls to Daniels Building & Construction of Beaumont were deferred to the company owner, who has not returned any messages.

Daniels is the owner of the site.