All part of the game: Titans senior Brian Milton makes plays in relief 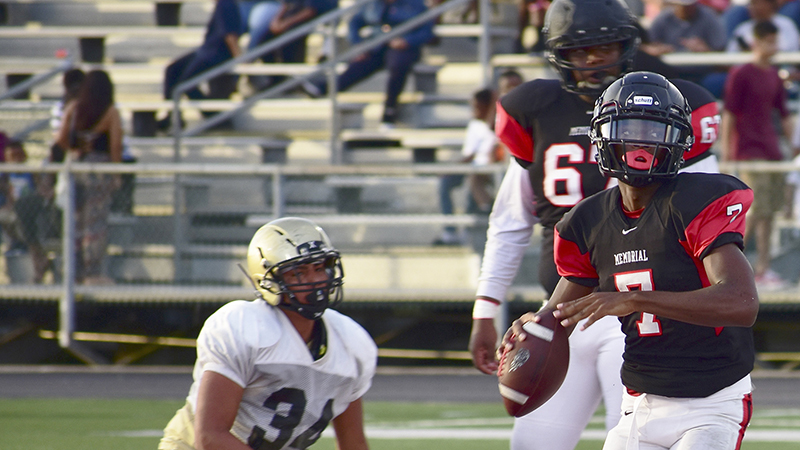 Memorial quarterback Brian Milton, wearing No. 7, rushes out of the pocket during an Aug. 22 scrimmage against Nederland in Port Arthur. (I.C. Murrell/The News) 8-22-19

Memorial sophomore Jah’mar Sanders was taken out of the game for an injury after a helmet-to-helmet hit with a Porter defensive back in the third quarter.

He’s feeling 100% now going into Friday’s game, though he blames himself for the bad hit.

“It was my fault,” the quarterback said. “I hurt myself but I’m feeling good now.”

This put Brian Milton behind center for the rest of the game. The senior led the offense and connected with his receivers to get the Titans (3-4, 2-2 in District 9-5A Division I) their second touchdown in the fourth to tie the Spartans 14-14.

Then the fumble happened. Milton was sacked, Porter’s Jordan Lewis recovered the ball, and the Spartans scored three plays later. They kept that lead for the final 3:27 of the game to win 21-14.

“I thought we struggled up front to block [Porter]. We put our offense in a tough position when trying to run the ball or throw the ball,” Memorial head coach Brian Morgan said. “I thought we had a solid game plan going into the game, but it was just really tough when we weren’t able to protect the quarterback or run, so it just made it tough on moving the ball.

“We had some turnovers, some untimely turnovers. That’s just part of playing football.”

In all, Milton and his offense did make plays in the second half. Milton himself completed 7 of 10 throws that night for 76 yards, just 2 yards shy of Sanders’ total. He connected with receivers Alex Ned, Jessie Cornell and Tavian Gipson. Gipson even caught the 12-yard pass that set Branden Chaney up to score the Titans’ second touchdown.

Still, Milton wishes he could have done more.

“I feel like I did enough, but I didn’t do enough,” he said. “I could have done more. I wanted to score, at least, that’s what I really wanted to do, but everything happens for a reason.”

Milton moved into the quarterback position his sophomore year after having played on defense since seventh grade. The plays he made against Porter (6-1, 4-0) are testament to his experience and comfort behind the ball, and he believes he’s just getting better.

“Brian did what we expected him to,” Morgan said “He went in there and ran the offense like we expected him to. There wasn’t anything that was a surprise. To me there shouldn’t be a change. We don’t run a different offense when he’s in the game. He knows what to do. I fully expect him to operate on whatever snaps he takes.”

Milton’s also continuing to work on his ball handling.

“I’m doing ball handling drills everyday, both at the beginning of practice, and I have to get in a little extra work at the end of practice.”

He, along with Sanders, feels ready heading into this Friday’s game against Kingwood Park (3-4, 2-2).