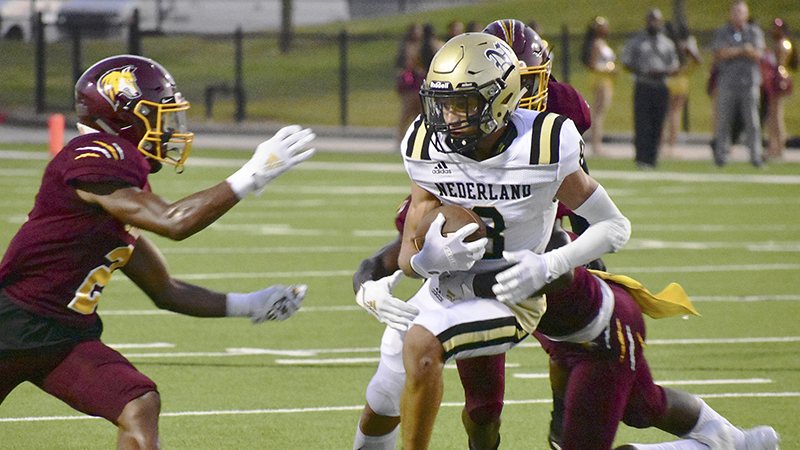 The Nederland Bulldogs racked up 492 yards offensively in their win against the Baytown Lee Ganders 48-26 last Friday. Of those, 188 came from Kyndon Fuselier, a sophomore wide receiver and running back.

“What he does with the ball after he catches it is special,” Bulldogs head coach Monte Barrow said. “He’s played running back his whole life, so when playing that receiver slot, once he catches it, he’s a running back again. He has a lot of yards after a catch.”

“A lot” translates to 651 receiving yards this season, the most of anyone in District 12-5A-II. The next best, Barbers Hill junior Cameron Cauley, has 584.

Fuselier’s performance on Friday, including two touchdowns, earned him The Port Arthur News Player of The Week honor for Week 8.

Fuselier believes he’s just a part of a team that’s coming together.

“I feel like we did well,” he said. “We got better as a team — we came together. We played to our potential and I’m glad I could contribute to the win.”

Nederland improved to 3-4 and 3-1 in 12-5A-II, tied with Crosby and Port Neches-Groves for second in district standings. Lee is 4-3 and 1-3, two games outside of playoff contention with three games remaining.

Bryce McMorris made his fair share of contributions. The senior quarterback completed 17 of 23 passes Friday for 320 yards.

McMorris tops the district charts for total yards this season with 1,512, and for the best completion percentage at 57.8%.

“It’s been fun,” Fuselier said about playing with McMorris. “He knows when I’m open and what I can do.”

Fuselier played running back during middle school and was on the freshman team until he was brought to varsity in the middle of last season. With more than half of his high school career left to play, he will grow to be one of the Bulldogs’ reliable playmakers, Barrow says, though he’s grown much so far.

“From being a freshman last year, there’s so much going on in a young person’s life,” he said. “You’re the small fish in the pond, so to speak, but he jells well with guys in his own grade and guys that are older than him. They respect him for what he can do with the ball and make plays, and at the same time giving them the credit they’re due.”

Heading toward Friday’s game against Vidor (3-3, 2-2 in 12-5A-II), Fuselier is focused on continuing to jell with his team.

“I think we just need to keep a straight head, keep communicating on defense and come together,” he said.

Other big performances in Mid- and South County from Week 8: