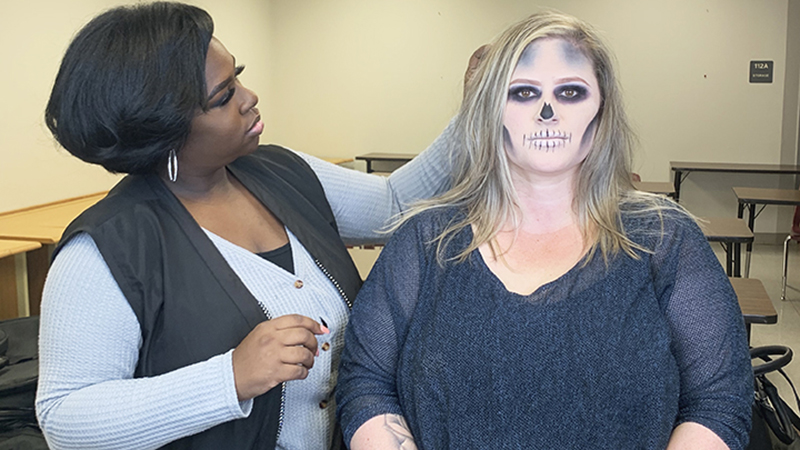 Lamar State College Port Arthur student Chassity Payne has found herself in the same seat she was in several years ago.

The Port Arthur native attended the cosmetology program seven years ago. Now 30, she returned this semester to finish her degree and complete her instructor’s license to top it off.

“My first job, I started working at JCPenney in the salon,” she said. “I was already doing makeup before I went to cosmetology school and I’ve kept doing it after, but I worked at JCPenney for maybe about two years before moving to booth rental.”

After JCPenney, Payne worked at Touches on Gulfway Drive for two years before switching to Devine Dimensions in Nederland, where she currently resides.

“I love doing hair and makeup equally,” she said. “One of the things for me is I want to use as much of my license as possible. I barber. I love women’s hair. I like waxing and doing makeup. The only thing I really don’t like doing is nails.”

Payne said after working for a couple years professionally, she decided she wanted to return to LSCPA and potentially be a teacher.

“I wanted to do it (seven years ago) but I wanted to work first for awhile,” she said. “This just ended up being the perfect time for me to come back. I knew I wanted to come to Lamar State College Port Arthur because I was so prepared to go into the workforce that I knew if I came back for my instructor’s license that I would be prepared to teach.”

Payne said she would love to return to her alma mater as a teacher but is open to working at any school.

“The growth just warms my heart,” she said. “It makes me feel like I had a part in helping her with her career. I feel that she is benefitting from the education I gave her and to see her comeback to want to be an instructor and follow in my footsteps is beyond amazing.”

Aside from becoming an instructor, Payne hopes to become a special effects makeup artist, a craft she practices during the Halloween season.

“Crazy enough, I worked for MAC for about four years and the first time I had to do (Halloween makeup) was at the counter,” she said. “I didn’t want to do it, but it ended up not being that bad. I do it on Halloween when people ask me now. At some point I want to get into special effects makeup so that kind of goes hand and hand.”

Payne said she is excited for the next steps in her future and is thankful to LSCPA cosmetology program for setting her on the right path.

“LSCPA launched me off to do all the other stuff that I’ve done,” she said. “I encourage any one else who is interested in the program to just go ahead and do it. It’s only going to benefit you in the end.”

Outside of doing hair and makeup, Payne enjoys spending time with her husband Jeffrey Payne and 10-month-old son Jeffrey Payne Jr. and singing on her praise and worship team at Harvest Time Bible Church.