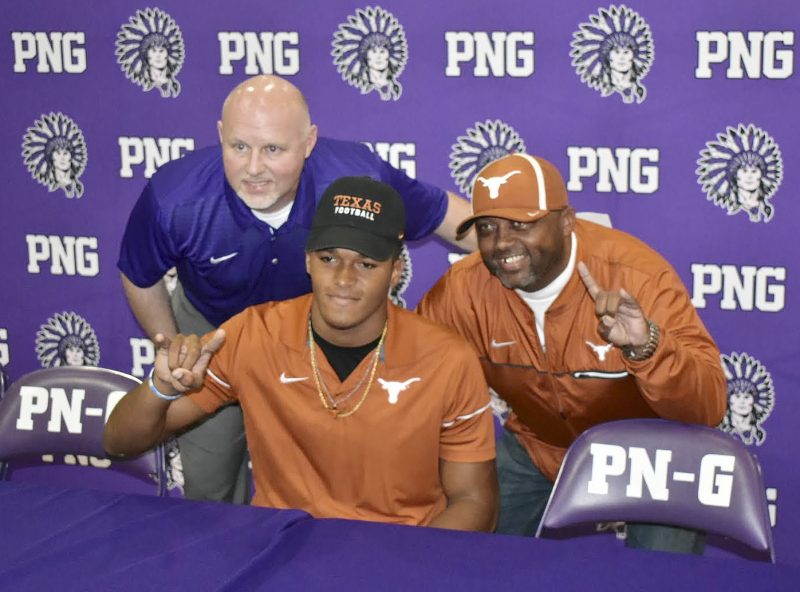 DALLAS — Roschon Johnson made his debut in the Red River Showdown in grand fashion and nearly got 100 rushing yards out of it.

The December 2018 Port Neches-Groves graduate rushed eight times for 95 yards and a touchdown — including 57 on a rush that led to his 4-yard score — but he and the Texas Longhorns fell just short of keeping the Golden Hat on Saturday as the Oklahoma Sooners won 34-27.

Texas won last year’s Red River Showdown at the Cotton Bowl, but Oklahoma got the last laugh that season by winning the rematch in the Big 12 championship game in nearby Arlington.

Both teams played under the threat of an ejection for unsportsmanlike conduct after referee Mike Defee, a Nederland native, flagged everyone 30 minutes before the game when clusters of players got too close at midfield while wrapping up warmups and started jawing at each other.

The only ejection was Texas defensive lineman Malcolm Roach, and it wasn’t for unsportsmanlike conduct. He was flagged for targeting while hitting Lamb helmet-first and late two plays before Lamb weaved through Texas defenders on a flea-flicker pass, going 51 yards for a touchdown.

A year after a 48-45 loss in the Red River Showdown that led to the firing of their defensive coordinator, the Sooners harassed Ehlinger into minus-9 yards rushing while holding the quarterback with the three highest total yardage outputs for Texas against Oklahoma almost 200 yards below that 387-yard average.

The Sooners (6-0, 3-0 Big 12) stayed on track for a third straight trip to the College Football Playoff. The Longhorns (4-2, 2-1) are likely relegated to a spoiler role if there’s a second consecutive Big 12 title game between the rivals.