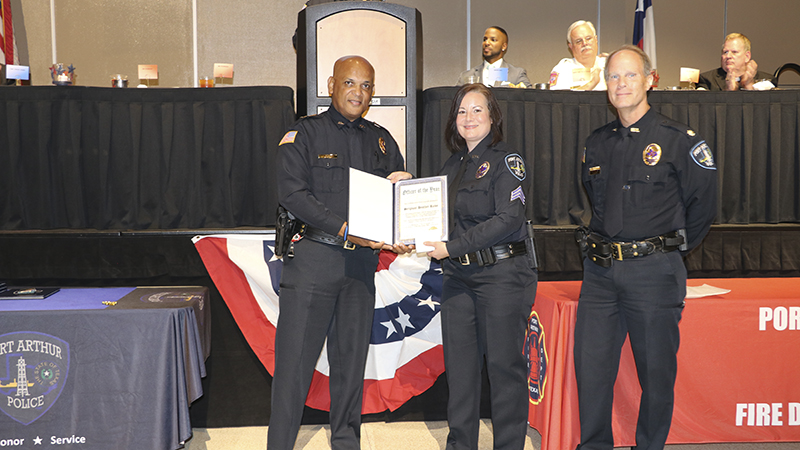 Heather Rowe has spent her career helping others and now has found her niche.

Rowe, a Port Arthur police sergeant, spent 17 years with the department and is now leading the Mental Health Program.

Her work has not gone unnoticed by her peers and last week she was named PAPD Officer of the Year.

She has long seen the need for mental health training for police officers and in 2005 laws were changed upping the number of hours officers were required to have in crisis intervention training. She had already spent time on patrol and worked in the street crimes division doing everything from graffiti cleanup to prostitution stings to gambling stings and more.

She’s happiest where she is now.

The department’s Mental Health Program was pretty much spearheaded by Rowe, according to information from the department presented at the awards ceremony.

She saw the need — knowing that first responders regularly encounter people with mental health issues who are in crisis — that with proper assistance such as diagnosis, treatment and follow-up will help reduce incarceration and hospitalization rates.

She got the green light to research the issue and gave the information to Chief Tim Duriso. The department’s program was launched in April.

Then came the obvious need to partner with Spindletop Center and on Sept. 24 Rowe was approved to act as mental health liaison, teaming with Qualified Mental Health Professional Lauree Chapman at Spindletop.

Though Rowe is still a PAPD sergeant, as liaison she has an office inside the Spindletop Center in Port Arthur alongside Chapman.

A police radio sits on her desk, along with a daily planner and laptop. The room is pretty sparse sans desks and chairs and a bouquet of colorful flowers. Tall, narrow windows give a view of trees.

“The ultimate goal is to get with mental health clients before they go into crisis and continue to work with them by doing follow-ups,” Rowe said.

The follow-up could include bringing the client to appointments, getting their medication and directing them to other services.

She said they try to keep a good relationship with everyone they work with.

“We build a relationship to see what kind of services they need. To see if their immediate needs are being met,” she said. “A lot of times we have people who not only need to get into the mental health system but they don’t have anywhere to live. So we’re helping meet other types of needs. Obviously it affects your mental health if you have no place to sleep or nothing to eat that night.”

Chapman interjects into the conversation, explaining their goal is to divert people with mental health issues away from jails and inpatient hospitals if at all possible, and the way they do this is through immediate crisis intervention.

“Be compassionate and sympathetic to what they are going through, as well as knowledgeable, and then they have the ability to continue that relationship for as long as that person needs to keep them out of crisis,” Chapman said.

Rowe wears what she calls a “soft uniform,” not the regular uniform you would see on an officer out on the streets. She identifies herself as a police officer then asks to be called by her first name.

“I want them to become comfortable,” Rowe said. “I don’t want them to see me as another cop they’re dealing with. I’m someone that, my whole job is to help them get to where they need to be.”

A lot of the time the people they come in contact with have had negative experiences with law enforcement and this is the first step, the women said, in establishing a better relationship in general and letting the person know they can trust law enforcement.

Chapman enjoys the partnership with Rowe.

“The way it works for me, not only is she trained in mental health, which is amazing and great, but she is here to keep everybody safe and make sure all the rules and laws are being followed,” Chapman said. “So, she brings comfort to me knowing I can walk into a situation and know whether it’s safe or not and that allows me to do my job better.”

Rowe knows she’s making a difference. They have had clients go from being in a crisis to being a fully productive member of society and hold down a job.

“It’s really cool to see. That’s where we are right now. Starting to see the fruits of our labor,” Rowe said. “We both love our job, love what we do and it’s very gratifying to see that you actually make a difference in someone’s life.”

Rowe doesn’t take all the credit for the success — it takes a lot of work on the individuals’ ends. And now she’s starting to get feedback from those she’s helped or their families though she can’t talk specifics.

She loves her job as a police officer and she feels this is the role she belongs in.

“Chasing dope wasn’t my thing,” she said of some of her earlier assignments. “There are guys and girls that that is their niche. This is satisfying to me. It makes me feel like I have a purpose. This is probably the first time in a long time I feel like I’m making a difference as a police officer.”