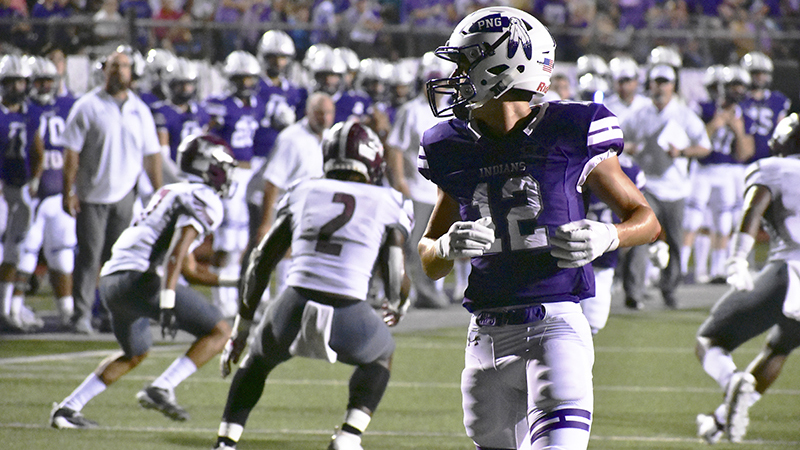 PORT NECHES — Although Peyton Proenza played the role of hero at Crosby last year, it’s not reflected in Port Neches-Groves’ record from that season.

Still, he played the hero.

“This week, I’m starting to remember it more often,” the senior wide receiver said. “I’m just focusing on the win as a team, not just as an individual.”

Running the same play after he was called out of bounds, Proenza caught the game-winning touchdown in the back of the end zone from Roschon Johnson with 3 seconds left. The victory only lasted 17 days, as PNG was made to forfeit the win because of an impermissible iPad that another team’s scouts discovered in the coaches’ box.

It did not keep the Indians from marching to a share of the District 12-5A Division II championship, and they’ve not lost a district game since.

Lightning could only delay, but not stop, any chance of an Indians’ comeback victory last week in Vidor that wasn’t completed until after midnight.

“Going into the game, we just wanted to win,” Proenza said. “We were playing OK the first half, but the lightning delay just meant everybody went into the locker room and chilled, not knowing the situation. We all wanted to win. We all knew that being in that silence, having time to ourselves in that silence, we were going to have new opportunity and new life in us, and that’s exactly what happened.

“We went out there. We played our best game, and we came out with the W.”

“That’s how it’s just played out,” Indians coach Brandon Faircloth said. “It’s two good teams playing each other. The team with the ball last, that’s kind of been the key the last two years. A lot of that had to do with Roschon, being the guy he is. We anticipate a great game. They’re a really talented football team. They’re big, they’re physical, and they’ve got really good skill players. They’re a tough matchup for anybody.”

Proenza, who is playing big this season with 206 yards on 16 receptions and three touchdowns, welcomes the challenge, knowing he stepped up against the Cougars last year.