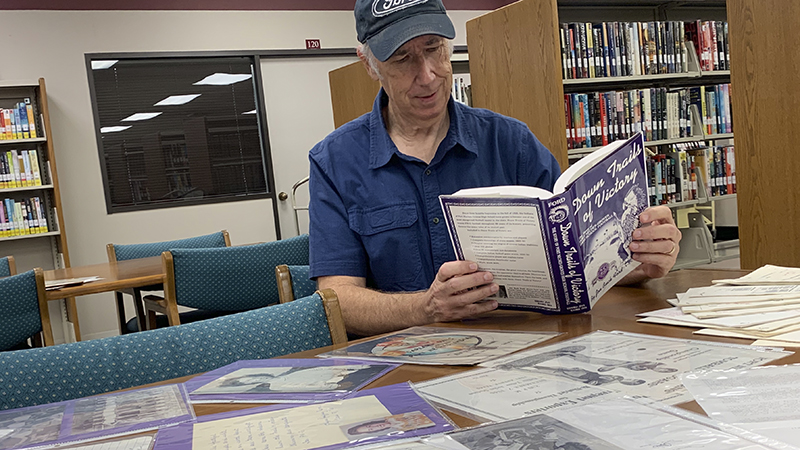 Jon Buck Ford, author of “Down Trails of Victory: The Story of Port Neches-Groves High School Football” is preparing to set up a display on the making of his book at the Effie & Wilton Hebert Public Library in Port Neches. The display will be set up in the front lobby for the next several weeks. (Cassandra Jenkins/The News)

PORT NECHES — Port Neches-Groves football started in the fall of 1925 and has brought spirit, hope and victory to the area ever since.

In the following decades, the school developed the War Whoop, the team won their first state title in 1955, the band performed “Cherokee” and developed the iconic halftime show with the Indian “I.” The Indian Spirit truly came alive and one man dedicated years of his life chronicling that change.

Jon Buck Ford published “Down Trails of Victory: The Story of Port Neches-Groves High School Football” in November 1994 and sold his first 1,200 copies in less than six weeks.

25 years later the Indian Spirit is still very much alive and Ford has returned to his hometown to reminisce and share with the community how it all began.

“I have some original materials that I accumulated while I was writing the book that might be of interest to people around here,” Ford said. “I’ve been away for a longtime, but I know when I lived here PNG football was real special and the school was real special to the people here.”

A display of the making of “Down Trails of Victory” will be on show in the Effie & Wilton Hebert Public Library in Port Neches for the next several weeks.

Ford will have on display original materials from the making of the book, including rough drafts of each chapter, transcriptions from interviews with old players and coaches, a 1970s playbook, photos of the past teams and other items from the creative process.

“When the book came out, a lot of the attention was focused on the football, that’s the content of the book,” Ford said. “That was the focus, so a lot of the aspects of the writing process and how the book came to be developed wasn’t really revealed or paid attention to. I thought that it could be cool for people to see that process now.”

Aside from visiting the display, community members can purchase the second edition of the book from December 1994 at Wren’s consignment shop located on Port Neches Avenue.

“I wanted to be able to tell the stories I grew up with,” Ford said. “My dad (Lewis) was the head coach of the Indians in 1955 when they won state. My mom (Irene) started the Indianettes. I didn’t know a whole lot of stories, except the ones I grew up hearing about but when I started writing the book I decided I had to do the whole thing.

Ford graduated from PNG high school in 1973 and will be inducted as an honorary captain Nov. 1 at halftime during Port Neches-Groves’ final home game against Barber’s Hill.

Current PNG head coach Brandon Faircloth said he sees the same spirit and tradition with Port Neches football now as he did in the 1990’s reading Ford’s book.

“He was able to capture the true meaning of what PNG is all about and the pride in the football tradition,” he said. “He did an awesome job with the book and it’s something around here we cherish.

“The Indian pride tradition has meant something around here forever. We try to live up to it with coaches and players. It’s still the same. I’m extremely proud of our tradition and we just want to try and continue to add to it.”

The Saturday following the football game, Ford will be available for book signings in conjunction with Port Neches’ Art Walk on the Avenue at Wren’s Gift Shop.