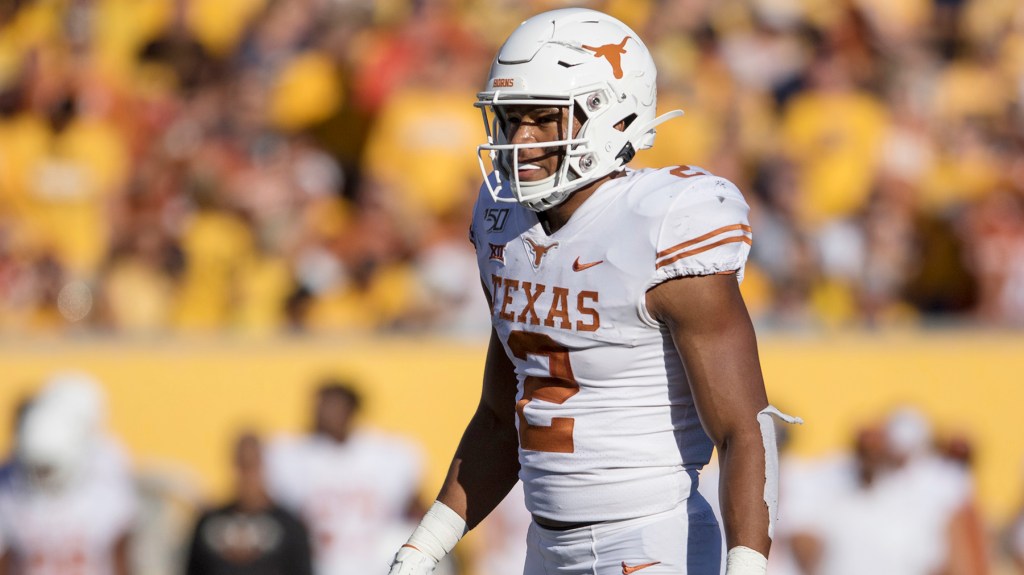 AUSTIN — Roschon Johnson arrived at Texas expecting a season of learning how to be a college quarterback, not being the Longhorns’ emergency fix at running back.

Yet five games into the season, the freshman from Port Neches is arguably the No. 11 Longhorns’ most reliable option at tailback and just produced a rugged and impressive 121-yard performance in a win at West Virginia.

Johnson still has his eye on playing quarterback, but is set to keep taking handoffs from Sam Ehlinger this season. The No. 11 Longhorns (4-1, 2-0) face No. 6 Oklahoma (5-0, 2-0) on Saturday in Dallas in the Big 12’s biggest border rivalry.

“If I’m playing running back right now, I’m a running back,” Johnson said. “Simple as that.”

Nothing was simple about his position change. It happened because Texas became desperate as preseason injuries piled up so fast coach that Tom Herman had nowhere else to turn. Texas had only two healthy scholarship running backs by the end of training camp.

Sitting in the quarterbacks meeting room was Johnson, who signed with Texas as one of the top dual-threat quarterbacks in the country, and who rushed for 4,900 yards in high school.

Johnson could clearly make people miss. But could he handle the position change against college defenses and would he want to?

He’s the one made the first move, sending a text to Herman before the season-opener against Louisiana Tech.

Johnson’s coaches and teammates had already seen his passion to play. Texas freshmen wear a red stripe on their helmet in training camp until they earn the right to take if off. The day Johnson was allowed to take off his stripe, he delivered a fiery speech to his teammates that he’d do anything for them.

“He pretty much poured his heart out,” said Texas senior center and team captain Zack Shackelford.

His drive matched the team’s needs at running back. Herman first planned to play Johnson on special teams, knowing he could still redshirt if he didn’t play more than four games. But when the tailback injuries list grew too long, Johnson was in the backfield in the season opener, even though Herman had called him a “break glass in case of emergency” option.

By the end of the first game, an injury to No. 2 tailback Jordan Whittington had moved Johnson up the depth chart again.

Even Ehlinger didn’t always know who he’d be handing the ball on any given play.

“I looked over and it was Roschon,” Ehlinger said. “I was like ‘What’s up, bro?’ … We were sitting in the same (quarterback) room a few weeks ago.”

Johnson had to carry the running game himself at West Virginia when starter Keaontay Ingram got roughed up early (Ingram would return late in the game), and Johnson tore through the Mountaineers at an average of 5.8 yards per carry. The effort earned him honors as Big 12 newcomer of the week.

Production like that is simply too good to take off the field. Daniel Young and Kirk Johnson, two of the tailbacks who were injured early, have both returned, but neither has more than four carries while Johnson keeps pounding out yards.

Johnson has made the switch look natural. He’s patient behind his blockers and looks comfortable running in the middle of the line.

But he wants to eventually throw passes again. Herman and Johnson eventually will have to talk about his future as a quarterback, where he was No. 3 on the depth chart when the season began. And with Ehlinger just a junior, it could be a while.

“Honestly, I’ll do anything for this team,” Johnson said. “I’m just rolling with the flow right now.”