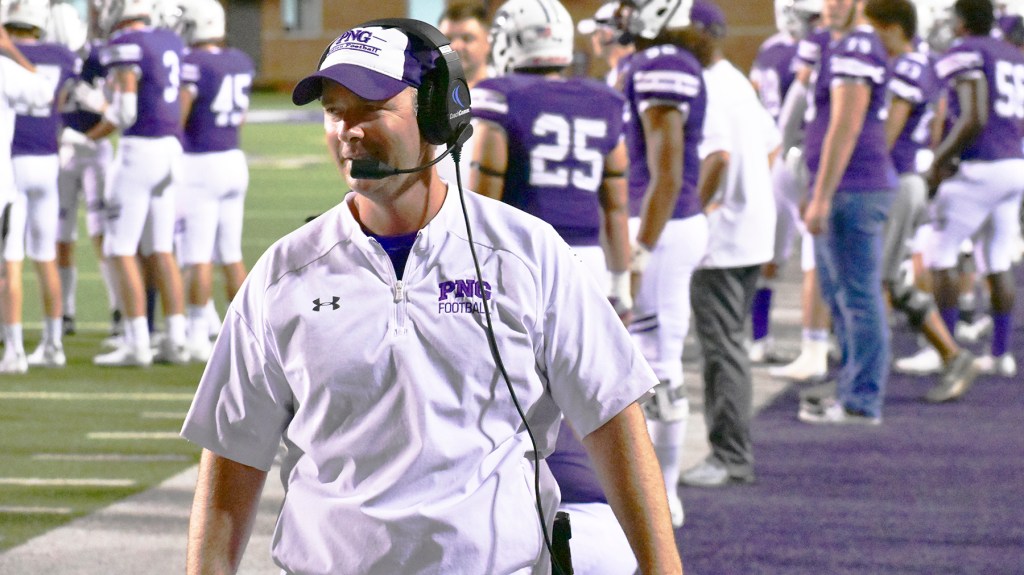 PORT NECHES — If trailing Vidor 10-0 early in the second half wasn’t enough hardship for Port Neches-Groves to overcome, Mother Nature brought more Friday night in the form of lightning in Vidor.

The game had already been delayed by 42 minutes due to lightning and would be put on hold an additional 1 hour, 45 minutes with just 30 game seconds remaining before halftime — what little of it would be taken. Senior defensive end Josh Patteson had a message for his team:

“Stay focused, keep your minds straight and don’t listen to what is going on in the crowd and all of that,” he reminded the Indians.

Greater than the fact that PNG overcame the deficit to win 18-10 was that the Indians (4-1, 2-0 in District 12-5A Division II) held the most explosive offense in the district to 195 total yards, well below its average of 442.3 yards per game at the time.

PNG had been giving up 374 per game going into Friday.

“I wish I could break it down to a science,” defensive coordinator Dustin Templin said. “It’s all about the kids. They did a great job staying focused. They had a great week of practice. They did a great job reading their keys and having eye discipline. That’s one thing we stress Vidor week with all their misdirection. They took it to heart that Vidor was going to challenge them and their toughness, and they were up to the challenge.

“They stayed focused and stayed hungry and didn’t let it faze them at all. I was proud of them.”

It’s one of countless defensive gems Templin has dialed up with the Indians. Against Huntsville in the second half of a Week 2 game, PNG shut out a team that had scored 27 points in the first 24 minutes and held the state-ranked Hornets to 28 yards.

PNG still fell, 27-10, but gained momentum from that strong half to post three straight victories, Mother Nature notwithstanding.

Up next for the Indians is Crosby (1-3, 1-1), a team the Indians have slightly outscored 120-114 the past two seasons despite last season’s win having to be forfeited for an illegal recording device inside the coaches’ box.

“We’re excited,” Patteson said. “We’ve got a great game plan to keep the score low. That way, our offense can go do their thing.”