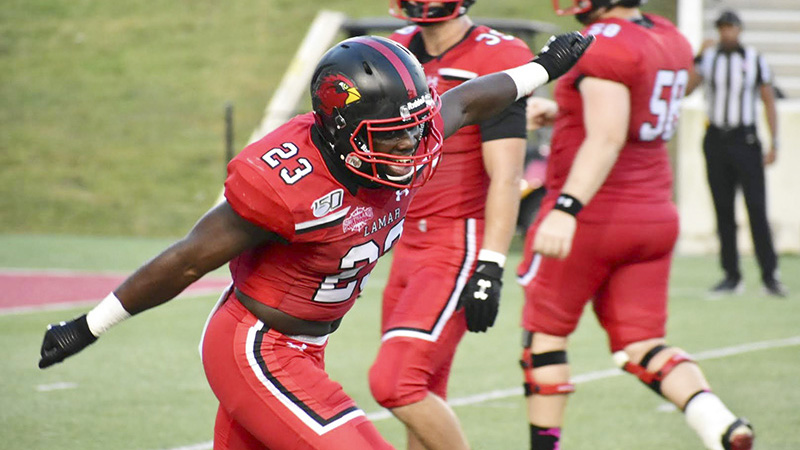 BEAUMONT – A short-handed Lamar squad put an end to a three-game slide Saturday by rallying for a thrilling 27-24 victory over Abilene Christian at Provost Umphrey Stadium. The Cardinals recorded more than 500 yards of offense while ACU finished the night with 289.

The primary recipient of Hoy’s passing was junior Kirkland Banks. The Lake Charles native hauled in a career-high 10 passes for 145 yards and one score. Banks’ TD reception was a 55-yard strike.

Big Red did a great job Saturday of keeping ACU’s defense on the field. The Cardinals finished the night with a 13:40 advantage in time of possession.

“We talked to our guys all week about how our young guys were going to have to step up,” said LU head coach Mike Schultz. “An example is we had safeties playing at corner tonight. I’m very proud of how these guys fought. I told this to our kids, everyone of these games are going to be like this. It’s just how things are in this conference. There will be no easy games because there is just so much parity in the league.”

The Cardinals jumped out to a great start scoring the game’s first 10 points. The first score of the game came late in the opening quarter as Hoy found Banks open across the middle for a 55-yard touchdown. The score came on the first play of the drive. Big Red added a Bailey Giffen field goal eight minutes later to take a 10-0 lead.

The Wildcats were able to answer five minutes later when Sema’J Davis connected with Kobe Clark from 13 yards out, but ACU missed the extra point try and trailed 10-6. The Cardinals appeared to be moving the ball down the field for the answering score but the Red and White coughed up the ball in ACU territory. The Wildcats took advantage of the miscue by pushing the ball across the goal line four plays later to take their first lead of the night, 13-10, with 1:03 remaining in the half — a lead they would take into the locker room.

Despite trailing at the intermission, the Cardinals outgained their visitors. LU racked up nearly 300 yards of offense, while Abilene Christian was held to 168.

The Wildcats opened the second half with a field goal before the Cardinals got back on the board. Big Red drove the ball right back down the field on the ensuing drive to reclaim the advantage. Hoy capped a 10-play, 75-yard drive when he hit junior Mason Sikes down the far sideline for a 31-yard score. Sikes ran through two would-be tacklers at the two for the score. The 10-play drive took 4:40 off the clock as LU reclaimed a one-point lead, 17-16.

ACU reclaimed the lead right before the end of the third on an 11-play, 75-yard drive that ended with a Davis’ five-yard pass to Tracy James. The Wildcats went for two and converted to regain a seven-point lead, 24-17. The Cardinals had an answer when Giffen was called on from 41-yards out to trim the deficit to four, 24-20.

The Cardinals followed up the score with an onside kick which was recovered by Michael Lawson. Nine plays later Hoy pushed Big Red across the goal line with a plunge from four yards out. The score gave LU a 27-24 advantage with 6:20 remaining.

The defense came back out on the field and put ACU in a third-and-6 from their own 39. Senior Daniel Crosley flushed the Wildcats quarterback from the pocket and forced an intentional grounding, forcing ACU to punt the ball away. The Cardinals got the ball back and picked up two third down conversions to melt the clock away.

The Cardinals return to action next Saturday when they travel to Huntsville to take on Sam Houston State. The game against the Bearkats will kick off at 2 p.m. from Bowers Stadium and can be heard live on Newstalk 560 KLVI.