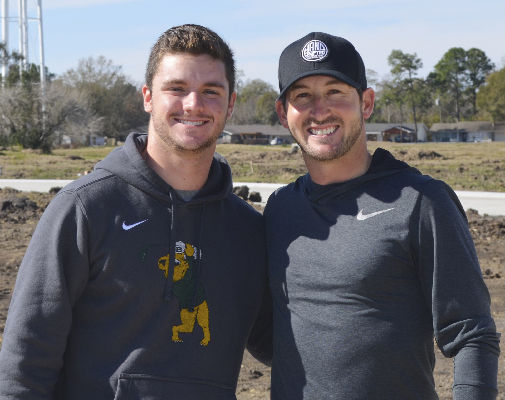 Braden Bailey, left, and Andrew Landry stand at the site of the former Pea Patch. (Brad Bailey/Special to The News)

Braden Bailey had pretty much resigned himself to the fact his long-shot hope of getting a sponsor exemption into the Houston Open was not going to happen. Then the text from Houston Astros senior Vice President and General Counsel Giles Kibbe popped up on his phone Monday afternoon.

Lamar grad Kibbe, who has played a major role in bringing the Houston Open back under the Astros banner, was referring to Brad Bailey and his deceased dad, Bobby. Bobby Kibbe used to play lots of golf at the Pea Patch and drinks lots of beer on the back porch with Braden’s grandfather.

“Braden’s a great young player and an even better person,” said Kibbe, about extending the exemption. “I’m proud of him and really happy we were able to get him in the tournament. It’s great to have another Pea Patcher in the field.”

Kibbe, of course, was referring to the fact that Pea Patch alums Chris Stroud and Andrew Landry were already in the Houston Open lineup.

“I am so excited,” said Bailey, who probably nailed down the exemption when he won the Korn Ferry Stage One qualifier last week at The Woodlands. “It is a dream come true. Honestly, I had given up on it. I know a lot goes into deciding who gets sponsor exemptions and I didn’t think it was going to happen for me.”

For the record, the host of a PGA Tour event gets four sponsor exemptions and there are scores of players trying to get one each week. Many years ago, Stroud got a sponsor exemption in back-to-back years (2006-07) from what was then the Shell Houston Open.

So Stroud knows the emotions swirling inside Bailey.

“It was an incredible, dream-come-true experience for me,” Stroud said from Las Vegas. “I had been watching guys like Seve Ballesteros, and Fred Couples and John Daly play in the SHO since I was seven or eight and now I got my chance to play for my hometown.

“I am really happy for Braden. He will have an incredible career. Next week will only be the beginning for him. I look forward to seeing him play well.”

Ironically, Bailey was trying to qualify his way into the Houston Open at Cypresswood when Kibbe’s text landed late in his round. It arrived on a rare day when his game wasn’t anywhere near as solid as it’s been. He signed off on a 73 and would not have qualified.

“I wasn’t really prepared and didn’t play my best,” he said. “I needed a couple of days off after the Korn Ferry and I just wasn’t sharp.”

Bailey said his preparation for the Houston Open will follow his script from the summer — practicing at Beaumont Country Club. He’s scheduled to play in one of the Houston Open’s Monday Pro-Ams and will also have tournament obligations on Tuesday.

Braden will need no introduction to the Golf Club of Houston, which will be hosting the tournament for the last time before it moves to Memorial Park next fall. Baylor played in a February tournament there all four seasons he was a member of the Bears’ team. His high-water mark was a tie for second.

“I like the golf course a lot,” he said. “I know it’s going to play a lot firmer and faster in October than it did in February. That will probably offset some of the difference in distance, because I know the PGA Tour will have the tees farther back than we played them.”

With Bailey in the field, along with Stroud and Landry, it sets up a near-unprecedented situation of three players from the same high school in the same PGA Tour event. So how wild would it be if the three got paired together for their Thursday and Friday rounds?

Can you imagine the mass of purple-clad fans following them? Would the sounds of “Cherokee” be blaring in the background?

“That would be awesome to be paired with them,” said Bailey. “It would be such an unbelievable experience I don’t even know what the right word would be for it. Being with Andrew and Chris would definitely help me be more relaxed and at ease.”

If Kibbe could make the decision, it would happen. He understands the dynamic that would be in play with fans from Mid-County. Alas, the PGA Tour has a formula for how pairings are done.

Kibbe said he is going to mention the unique circumstances to PGA officials but did not seem optimistic that the trio of former Indians would be playing together.

Interestingly enough, Stroud and Landry have never been paired in a PGA event.

Tickets for the Houston Open, by the way, are on sale exclusively in the Golden Triangle at 5 Under Golf Center (formerly Games People Play) in Beaumont. Cost of a daily pass is $45. Anyone 15 and under gets in free when accompanied by an adult with a valid tournament ticket. Those wanting to reserve a ticket at 5 Under Golf Center can do so by calling 232-0205 (or click here).

Bailey, meanwhile, says he will do his best to not be overwhelmed by the situation.

“I know there will be nerves, but I think I perform my best when that’s the case,” he said. “I was more nervous than I’ve ever been at the Korn Ferry last week and things turned out pretty well. My mindset is not going to be to just show up and try to make the cut.

“My game is good right now. If I can stay free and relaxed, I think I will do well. I am going to be playing against some of the best players in the world, so I look at it as having everything to gain and nothing to lose. It will be a great and memorable experience.”

In the Monday Senior 50 Plus 2-ball at Babe Zaharias, the team of Gary Hanan, Danny Keen, John LeBlanc and Jeff Rinehart won the front with minus-4. On the back, the foursome of Dwayne Morvant, Harrell Guidry, Gerald Huebel and Pete Reobroi placed first with minus-3. …

The Friday Senior 2-ball at Zaharias saw the team of Kenny Robbins, Bill Hammond, Dillard Darbonne and Dwane Benoit win the front with minus-3. The back finished in a three-way tie at minus-1 between teams captained by Don MacNeil, Hanan and Bob West. …

Golf news should be emailed to rdwest@usa.net 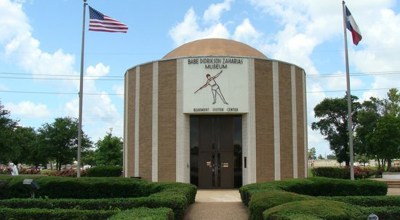