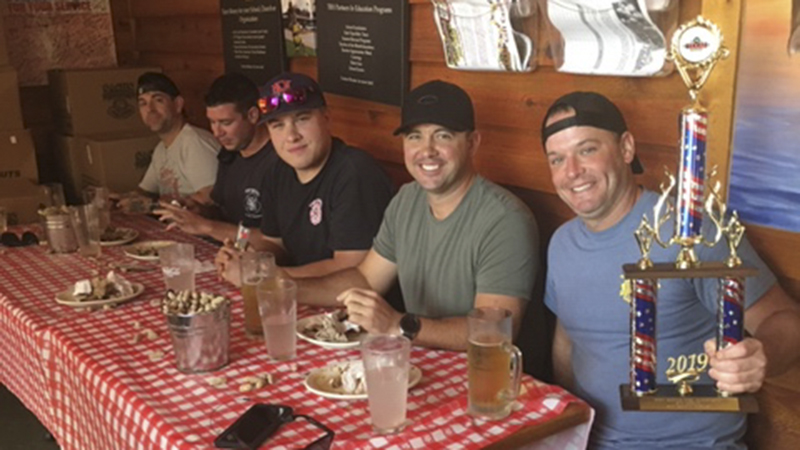 Two rival sets of first responders battled it out, not on the playing field but at the dinner table with a plate of ribs and rolls.

Texas Roadhouse was the scene for a chow down, rib eating competition between Nederland Police Department and Port Neches Fire Department, with the firefighters earning the top honors for the third time out of five matchups.

“The strategy is kind of gross,” said Port Neches Fire Chief Paul Nelson, who was there Saturday in a supportive, not competitive role. “You stick the roll in water and it falls apart and the guys are basically drinking water with remnants of rolls.”

Nederland Police Chef Gary Porter was a contestant and can attest to the grossness of the wet roll strategy.

“You have to tear the rolls up and throw them in the (glass of) water, woof down the ribs as fast as you can and once the rolls are down to a disgusting consistency, gobble those down because they’re wet,” Porter said. “I think we’re going to give (Officer) Brant Halfin the unofficial animal award.”

Halfin ended up as the ringer on the team, Porter said with a laugh before taking a good-natured jab at the firefighter team.

“Firefighters are professional eaters, it’s not really fair but we gave it our best shot,” he said. “We’ll beat them next year. We’re out recruiting another carnivore.” 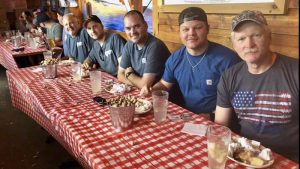 The ribbing between the police and the fire continued on the Nederland Volunteer Fire Department Facebook page under a photo of the NPD team, where retired police chief Darrell Bush said “firemen train for this, they eat until they’re sleepy, then sleep until they’re hungry” to which a retired fire captain humorously answered “donut envy?”

Mike Griffin, managing partner with Texas Roadhouse, explained the reason for the foody competition. September is Ribfest at Texas Roadhouse where they celebrate their “fall of the bone ribs.” The local eatery tied it in with Mid-County Madness, which is the rivalry between Port Neches-Groves High School Indians and Nederland High School Bulldogs, and a competition was born —not to mention the fact that police and fire have their own kind of rivalry.

Each team has five members and one by one eats their way through a half a rack of ribs and two rolls.

“It’s competitive but obviously they want to win,” Griffin said. “The guys have a good time and a lot of families show up to watch.”

The speedy eating is a fun time and Griffin speculates that teams bring in a ringer.

“They bring in the hammer guy toward the end,” he said. “It’s pretty amazing how fast they can eat.”