Cardinals surge ahead, but give up winning touchdown on homecoming 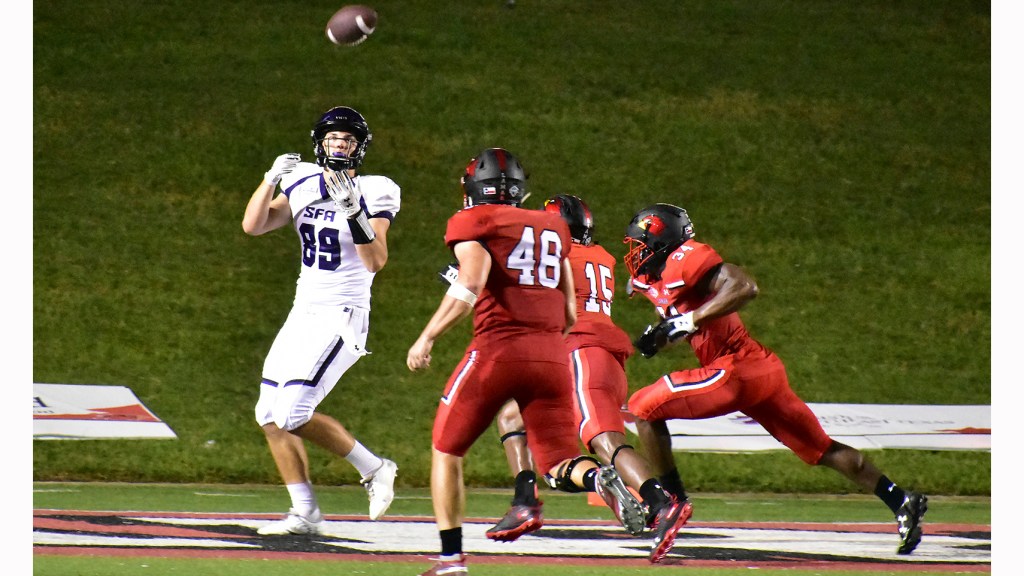 BEAUMONT — Despite two fourth quarter touchdowns, including an interception that was returned for a score, Lamar  was edged by Stephen F. Austin on Saturday evening on homecoming, 24-17. The loss snapped the Cardinals’ five-game home win streak.

The Cardinals (2-3, 0-2 Southland) finished the night with 358 yards of total offense, including 236 in the second half. SFA ended the night with 394 yards. The key stat for LU was penalties. The Cardinals were penalized only six times for 55 yards but they all came at critical moments of the game and nullified big plays, including one that erased a punt return for a touchdown and a completion down inside the red zone. 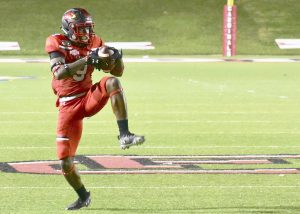 Kyron Norwood of Lamar intercepts a pass and returns it 15 yards for a touchdown Saturday against Stephen F. Austin in Beaumont. (I.C. Murrell/The News) 9-28-19

Senior Jordan Hoy completed 19 passes for 203 yards and one touchdown — the lone TD pass was caught by junior Mason Sikes. He also carried the ball 24 times for 54 yards. The Cardinal defense was led by junior Andre Mulinax who recorded eight tackles. Classmate Kyron Norwood had six tackles and one interception which he returned 15 yards for a touchdown.

“We self-destructed tonight,” said LU head coach Mike Schultz. “We had opportunities throughout the game and kept shooting ourselves in the foot. You can’t make mistakes like that in this league and win. We knew SFA’s record was not an accurate reflection of how talented a team they are.” 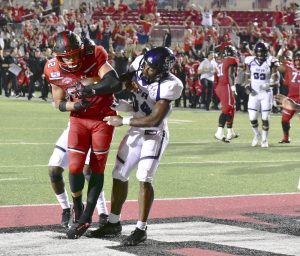 SFA cracked the scoreboard first with a 24-yard field goal from Storm Ruiz. The kick capped a 10-play, 68-yard drive that took more than four minutes off the clock. Big Red responded on the very next possession with a nine-play, 38-yard drive which ended with a 44-yard Bailey Giffen field goal.

Unfortunately, those would be the only points of the half for LU as the Cardinals were forced to punt the ball away on their next 10 possessions. The Lumberjacks closed out the half with a touchdown and a field goal. The touchdown came on a three-yard run from Da’Leon Ward with 5:51 remaining in the half. SFA got the ball back and tacked on a 30-yard field goal to close the half to take a 13-3 lead into the intermission.

The Cardinals were outgained in the first half as SFA finished the opening 30 minutes of action with 220 yards while LU finished with 122. SFA did the majority of its damage through the air with 181 yards.

Neither team could dent the scoreboard in the third quarter, and after LU was forced to punt early in the fourth the defense came up a momentum changing play. After having a potential pick six slip through his hands earlier in the half, Norwood picked off Trae Self’s pass at the SFA 15 and bulldozed his way through traffic for the touchdown. The score pulled LU within three, 13-10, with 11:43 remaining in the contest.

After the Lumberjacks built their advantage back to six points, LU went back on the attack. After a pass interference call moved the ball out to midfield, the drive stalled and the Cardinals were faced with a fourth-and-7. Hoy found junior A.J. Walker over the middle who carried the ball down to the SFA six yard line. That play setup a TD pass to Mason Sikes over the middle to hand the Red and White their first lead of the game, 17-16, with just under 7 minutes remaining.

SFA reclaimed the advantage just over a minute later when Da’Leon Ward hit Ryan Waugh from 4 yards out. The score gave SFA a 24-17 lead with 5:15 remaining. The Red and White had two more chances with the ball but came up empty.

The Cardinals will look to get back on track Saturday when they return home to host Abilene Christian. The game against the Wildcats will begin at 6 p.m. from Provost Umphrey Stadium. It can be heard live on Newstalk 560 and seen on ESPN+.