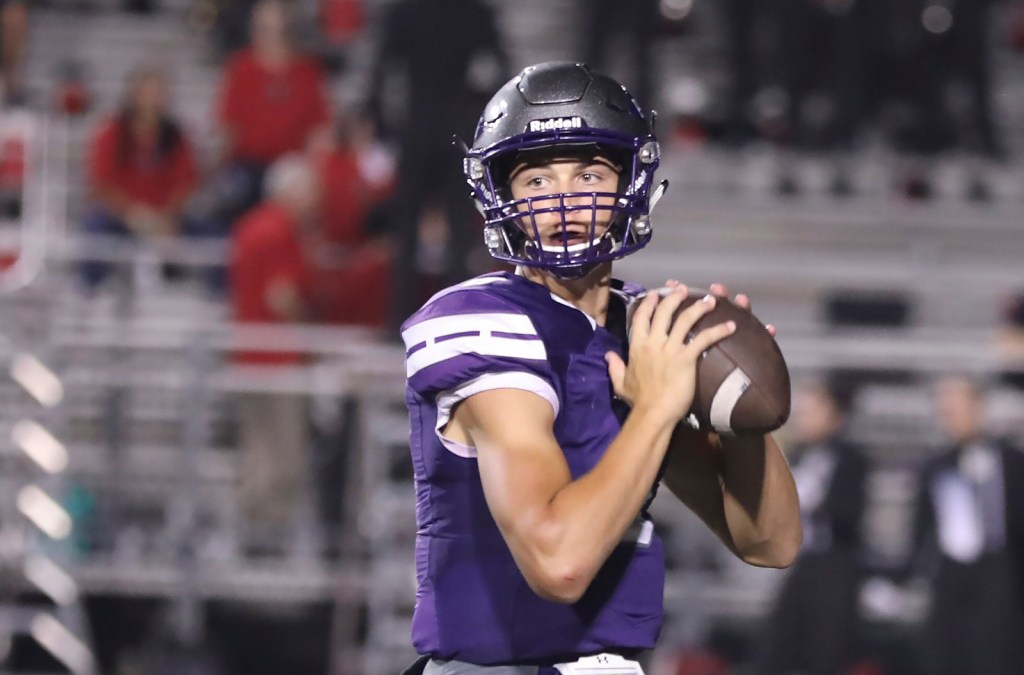 Blake Bost of PNG drops back for a pass against Tomball on Sept. 13 in Port Neches. (Leo Weeks Photographers) 9-13-19

PORT NECHES — A staunch advocate of practice making perfect, Port Neches-Groves coach Brandon Faircloth would love to have back the practice time that Tropical Storm Imelda washed away last week.

“Tuesday and Wednesday, we were in the gym. I don’t call that practice,” he said. “Just a walkthrough. Friday, the receivers and quarterbacks came up and threw. Saturday, we actually had practice, so we tried to make up a little bit and get ready for this week.”

Whether or not putting in work on hardwood constitutes practice, senior center Trey Lisauckis believes the Indians made the most of it, with tougher circumstances waiting outside the gym walls.

“We had a couple of gym practices last week, but I think we stayed focused and we came out here on Monday and we had a great day,” Lisauckis said. “The last two days have been great. I think we’re really ready to go this week.”

Thriving in adversity is commonplace at The Reservation, from dealing with multiple lineup changes at once to helping a community in the aftermath of natural disaster. Like five of their fellow District 12-5A Division II teams, last Friday was an open date for the Indians (2-1), with only Crosby at West Orange-Stark and Little Cypress-Mauriceville at Vidor called off.

“We had kids and families who were affected and things like that,” Faircloth said. “We had guys out helping people rebuild and take stuff out, so I was really proud of our kids and how they responded.”

Ten years since its last playoff appearance, Baytown Lee (3-0) is showing a response of a different kind on the field.

Remarkably, the team yardage ranks second only to Barbers Hill (473.3) in 12-5A-II and will seek to give PNG’s defense (401.7 yards allowed per game, seventh in district) problems. PNG’s offense has only amassed 341 yards per game, and junior Blake Bost has 483 passing yards and three touchdowns to his name this season.

Lee’s improvement from last season, when coach Tim Finn’s team went 4-6, has been just a matter of time. The team was loaded with sophomores two years ago, en route to a 1-8 season.

“They haven’t really had a close game this season,” Faircloth pointed out.

“Definitely, they’re going to give everybody in their district trouble. Coach Finn and his staff are really good coaches. They’ve got it going in the right direction.”

After an eventful week, playing a Friday night game will bring the Indians a much-needed release from reality, Lisauckis believes.