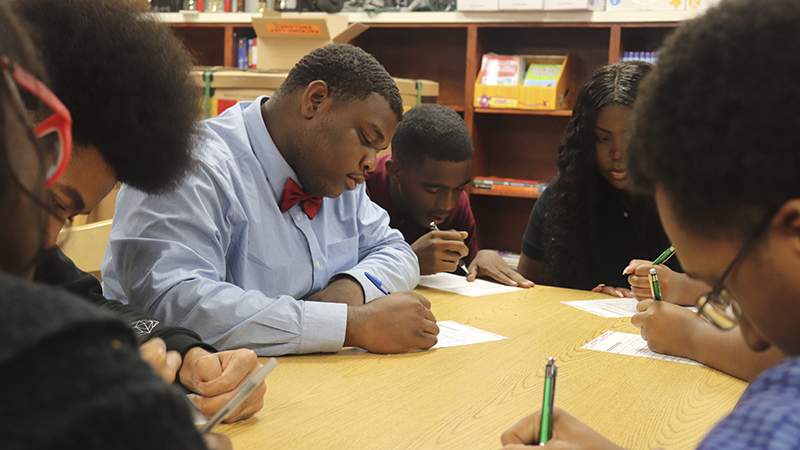 Seniors at Tekoa Academy in Port Arthur filled out their Voter Registration Cards, Tuesday. Jimmar Bailey, pictured in the red bow tie, celebrated his 18th birthday by joining the group in registering to vote. (Courtesy of Richard Johnson)

Seniors at Tekoa Academy of Accelerated Studies in Port Arthur want to make a change, their first step — voting.

A handful of students sat down armed with pen, paper and intellect as they prepared to take an important step into their futures by registering to vote. Spearheading the project was Andonnia Lowe.

Lowe who is the district activity coordinator for Tekoa said she wanted the seniors to learn that they have the chance to be heard and make a change.

“That’s our standards here at Tekoa,” she said. “We’ve always been registering kids to vote. It’s not new. At 18 they should be aware of why they should vote and that it makes a difference. The history, the culture behind voting is also important.

“The majority of us at this school are African Americans and our ancestors did not have this right. It’s not just a privilege, but an honor.”

Haven Abraham, Mark Aubry, Landon Ardoin, Jimmar Bailey and Joane Green comprised 90 percent of the students that filled out their voter registration cards on Tuesday. Each one took turns explaining why voting will be important for their futures, locally and nationally.

For Bailey, that day was significant in more ways than one. The Port Arthur native celebrated his 18th birthday by filling out his voter registration card.

“We discussed with one of our teachers on how to register to vote,” he said. “She brought us in and we chose to vote, to figure out things that need to be changed.”

Abraham said she felt it was her duty to vote to represent all her ancestors who were denied their voice.

“A long time ago, African Americans weren’t allowed to vote,” Abraham said. “They weren’t even considered citizens until after the 14th amendment. It’s important culturally.” 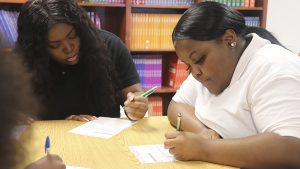 Ardoin stressed the importance that change is not possible without voting.

“At 18, this young, having the ability as an African American male to change things around me and impact things around me is amazing,” he said. “Having the chance to exercise a right that my ancestors fought for me to have, I’m able to do that now.”

Aubry said he looks at the benefit as being able to make local change.

“We can make a change in our community by voting,” he said. “We can help give better opportunities, help our people to own their own businesses, be independent and effect change.”

The next United States presidential election is November of 2020, allowing this fresh group of 18 year olds a chance exercise their voting rights. All five students said they planned on participating.

“This is the head of the nation who doesn’t just impact me, but everybody,” Ardoin said. “I’m definitely going to vote.”

Each student had a strong vision for the kind of leader they hope to see in the White House.

Green compared the nation to a schooling system, saying, “If you want something to be changed within it, you all have to gather together to choose something about it that you want to be done.”

Ardoin wrapped up the session perfectly by saying that complaining without action means nothing.

“People always want change in the country and things that can benefit them and their families,” Ardoin said. “I want to encourage them that if they want change, they have to act towards it. You can’t sit and complain about nothing happening, but not doing anything to change it. Voting is the first step to starting change.”