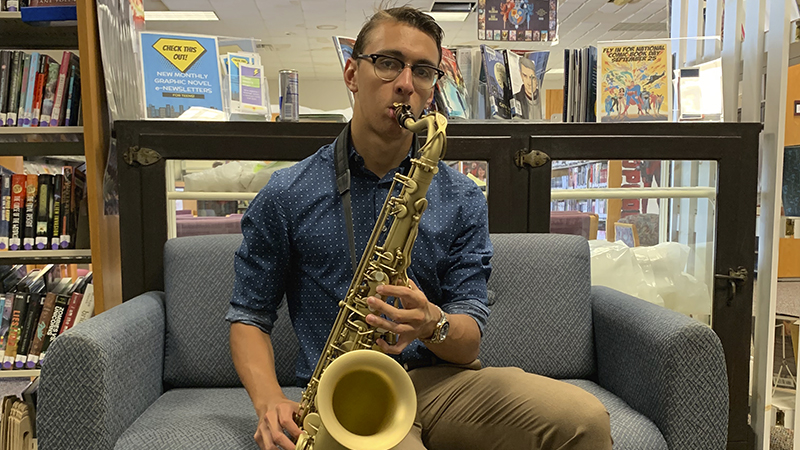 Gavin Lopez was selected as an outstanding performer at the 2019 Texas State Solo-Ensemble Saxophone Solo Contest this summer by the University Interscholastic League during his time at Nederland High School. Lopez has been playing saxophone since he was 12. (Cassandra Jenkins/The News)

Gavin Lopez found his passion for jazz at a young age.

He was only 12 when he picked up his first saxophone and began to play. Six years later he has played on the streets of Paris and has goals set for the future to be a well-known saxophonist and professor.

Lopez, a Nederland High School graduate, was selected as an outstanding performer at the 2019 Texas State Solo-Ensemble Saxophone Solo Contest this summer. The recognition is the highest level mark and only two to three percent of solo performances are chosen out of 25,000 musicians by the University Interscholastic League.

“That’s at the state level of solo and ensemble,” Lopez said. “I played a piece called, ‘Caprice en Forme de Valse’ by Paul Bonneau. It was a really hard piece. I practiced a lot. I was really surprised but honored. I was proud of myself.”

Lopez has been playing in some sort of marching and performing band for the last eight years.

He first began playing trombone before he found his calling for the saxophone.

During his senior trip to Paris, Lopez said he took the opportunity to perform in a beautiful new setting.

“It was really cool,” he said. “I bought my newest saxophone and I played there for a little bit during the trip.”

Lopez graduated high school in 2019 before being accepted to Lamar University for Music Education.

“The classes are made to teach more on the education side than performing side,” he said. “It focuses on teaching us how to be able to teach others music. I’d like to both perform professionally and teach later on.”

After graduating with his bachelor’s degree in music education, Lopez hopes to be accepted to the University of North Texas to pursue his master’s degree.

“I want to make the One O’clock Lab Band at UNT,” he said. “That’s the top college jazz band in the world. I’d like to become a better player, become well known, put out my own music and grow a lot as a musician.”

Lopez currently plays the saxophone in the Lamar marching band, but he also dabbles with the flute and clarinet. Although, he said the saxophone will always be his favorite instrument.