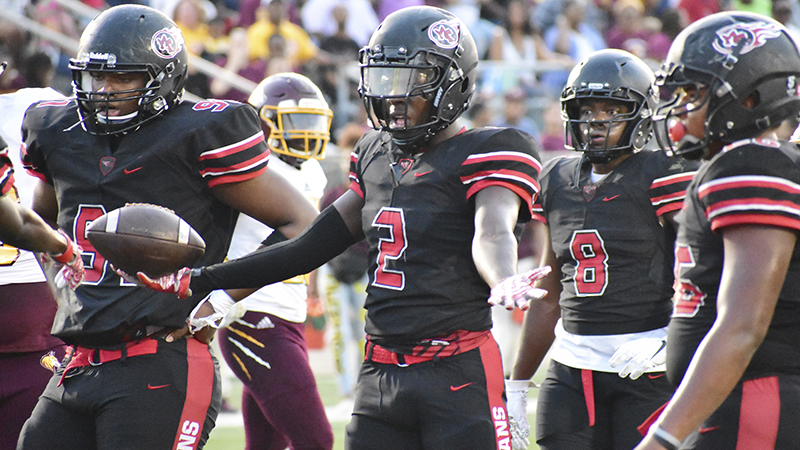 Memorial defensive back Colton Mitchell (2) petitions for an interception call during a Sept. 13 game against Beaumont United in Port Arthur. (I.C. Murrell/The News) 9-13-19

Friday was still practice day in Port Arthur although school was canceled, and the Memorial Titans are thankful for the escape that a little time on the field can bring.

“The weather kind of calmed down, so we kind of got out here and got some work in on the field, watching film and doing walkthroughs and stuff like that,” Memorial senior Colton Mitchell said.

Port Arthur started to flood Thursday morning, but by the time the sun peaked in the evening, streets were glistening rather than soaking in water. Still, the city was just two years removed from Hurricane Harvey.

“Everything was so stressful with water getting in people’s houses,” Mitchell said. “Going on the football field with our brothers and coaches, it’s just a relief.”

The rain returned Friday, but coach Brian Morgan determined a few raindrops were not going to hurt a little practice time.

“We fought through some rain, but we practiced well,” he said. “I thought it was good to come out and run around with the stress of the storm and everything.”

Memorial practiced Tuesday, Wednesday and Friday, Morgan said, during the bye week, which came just ahead of two Thursday games to start District 9-5A Division I play, the first at Galena Park and other in Port Arthur against Goose Creek Memorial. Morgan called Wednesday’s workout, which was held in the gymnasium, a “mental day.”

“The weather was coming in, so we couldn’t go outside. There was lightning in the area,” Morgan said. “We spent about an hour in the gym, going over the game plan and kind of getting started on Galena Park a little early. That was good for us to kind of learn what to do. It really gave us an extra day of prep. We had a really good Friday preparing for Galena Park, and essentially, [Monday] is a Tuesday practice, considering we play a day early this week.”

The 6-foot, 190-pound Mitchell, who moves around in the secondary as a safety and nickelback, picked off two passes last year. He’s looking for his first interception in 2019, but has been a tough man-on-man defender and made some breakups in non-district play.

“I was hoping I’d catch, like, six passes,” Mitchell said, stating a statistical goal for his senior year. “So far, I’ve only been targeted one time through three games. So, it’s kind of hard.”

Safe to say, opposing quarterbacks are respecting where Mitchell defends. He’s continuing to make plays in a secondary that came up with 13 interceptions last year, including five by then-senior Javontae’ Hopkins, three by then-senior Jaylen LaPoint and two by current senior Jatavian Neal.

Morgan said Mitchell plays with “a good awareness” in the secondary and is able to make calls with his knowledge about the defense.

“Coach Morgan told me to become more of a vocal leader,” he said. “A lot of people can lead by example, but there wasn’t a lot of vocal leaders on this team, so I’m doing my job, just being a vocal leader toward the team.”