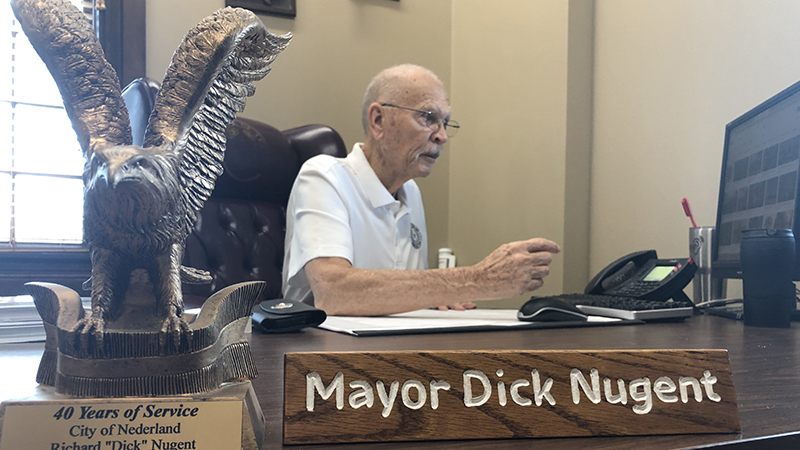 Nederland Mayor R.A. “Dick” Nugent works on his computer during his final weeks in office earlier this year.

NEDERLAND — Former Nederland Mayor R.A. “Dick” Nugent, who served the city as councilman and mayor, died Sunday. He was 84.

From his political service as councilman and mayor to tossing the first pitch during a game for disabled children to work in emergency management and involvement with his church, Nugent was there.

“Mayor Nugent instantly made a connection with the athletes of Adaptive Sports for Kids,” said Gay Ferguson with ASK. “He said he knew what it was like to have a disability and he wanted the best for our players. He was very proud to support ASK, both personally and through the City.

Nugent lost his leg to cancer some years ago but continued to be active as an amputee. Diana LaBorde, who knew Nugent from childhood into adulthood and later as executive director of the Nederland Chamber of Commerce, said he was candid about his battle with cancer and open about the symptoms.

After the loss of his leg, he used humor and made others around him comfortable.

“He amazed me,” LaBorde said. “He never missed an event, a coffee, anything.”

Roger Hensley, who is on the Chamber board, noted Nugent’s long years of public service, saying it speaks for itself.

Nugent, a native of Alexandria, Louisiana, was a 1953 graduate of Port Neches-Groves High School who earned an associate’s degree from Lamar University.

He spent 24 years as a laboratory technician with Texaco Research Lab in Port Arthur and in 1990 graduated from the Lamar University Police Academy with his Texas Law Enforcement Certification.

He began his political career in 1968, serving as a council member for 28 years. In 2004 he was elected mayor.

During his career, he also worked for Jefferson County for 16 years serving as assistant to the county judge and emergency management coordinator. And in 2005 he coordinated the city’s response to Hurricane Rita.

Nugent was also involved with the South East Texas Regional Planning Commission and Nederland Economic Development Corporation, as well as with other committees and projects.

He was also a member of St. Charles Borromeo Catholic Church in Nederland, where he was involved in the Men’s Acts Group, parish board, Knights of Columbus Nederland Council No. 5145 and was an usher.

In addition, he was an avid hunter and enjoyed building stained glass windows and lamps.

LaBorde grew up in the Helena Park area and she and her siblings were close in age with Nugent’s children.

“I grew up with him. There’s always that group of dads, everybody’s dad, the neighborhood dad,” she said. “He was one of those kinds of dads you could go to and he continued that throughout his life. He was born to serve.”

LaBorde said Nugent was extremely intelligent and there was nothing he couldn’t do.

Words from the city

Nederland City Manager Chris Duque worked with Nugent for a number of years. He offered some words regarding Nugent.

“The City is deeply saddened by the passing of former Nederland Mayor R.A. “Dick” Nugent,” Duque said in a news release. “Mayor Nugent cared deeply about Nederland, the Mid-County area, his friends and his family; he considered every employee of the City as part of his friends and family. Mayor Nugent dedicated much of his life to public service — serving Jefferson County for 16 years and serving the City of Nederland for over 46 years; three years as Emergency Management Coordinator, 28 years as city councilmember and 15 years as mayor. Mayor Nugent left a lasting legacy with the community. The City’s thoughts and prayers are with his family and friends.”

Nugent is survived by his sons; Ricky Nugent, of Burleson and Scott Nugent, of San Antonio; and daughter, Kelli Nugent, of Nederland.

Services are pending with Broussard’s in Nederland.