No reports of flooded homes in Groves 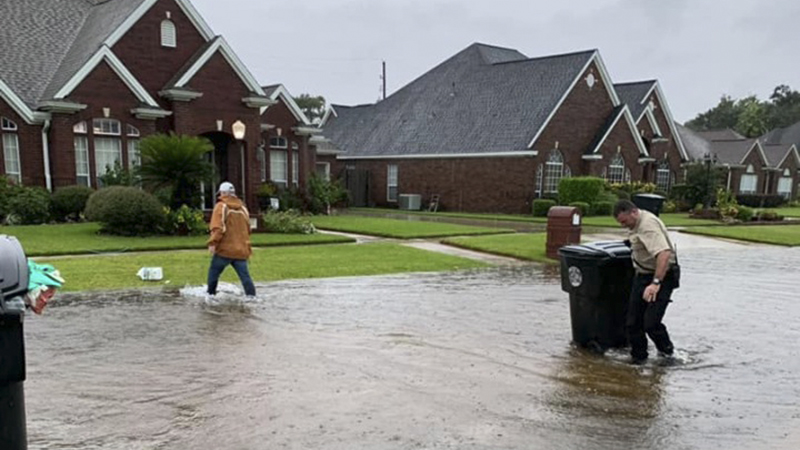 “No one’s called and reported it,” Sosa said. “I can’t say 100 percent, but I feel very comfortable that if someone were to get water in their house they would have called us by now.”

Sosa said the city saw its usual pattern of street flooding in the normal problem areas, such as the intersections of Hayes, Taft and Lay avenues with 39th Street, but that otherwise the rest of the city kept its head above water.

City employees patrolled the area checking up on ditches and doing what they could to keep drainage systems clear of debris.

“We were going by my neighborhood and saw that garbage cans — including mine — were knocked over, so we got out and picked up our garbage to make sure it didn’t get caught in the drainage,” Moore said.

Sosa touts the improvements Groves made in its drainage systems as a big factor in weathering the storm.

“Luckily the combination of our drainage improvements and DD7’s continuous pumping kept us from having any major street flooding besides the street flooding we normally get,” Sosa said.

Because of limits in design, much of those improvements were made to help move water more efficiently between existing areas that fill with water more quickly to those that don’t. To this end, Sosa said the city converted several utility easements into drainage easements to help move water into DD7 ditches, particularly along Lawndale Avenue.

“It worked beautifully (Thursday),” he said. “Lawndale didn’t have any problems that we could see. We’re not actually increasing our drainage design, we’re just moving the water more efficiently and moving it in areas where we have still the capacity to move more rainwater.

“I guess you could call it fine-tuning the drainage system.”

“The ditches weren’t bad at all,” he said. “We had a couple of them that were full and we had a couple that could withstand some more water. They did have some city workers out checking ditches and clearing stuff out. I also saw several residents clearing out their ditches as well, which is a big help.”