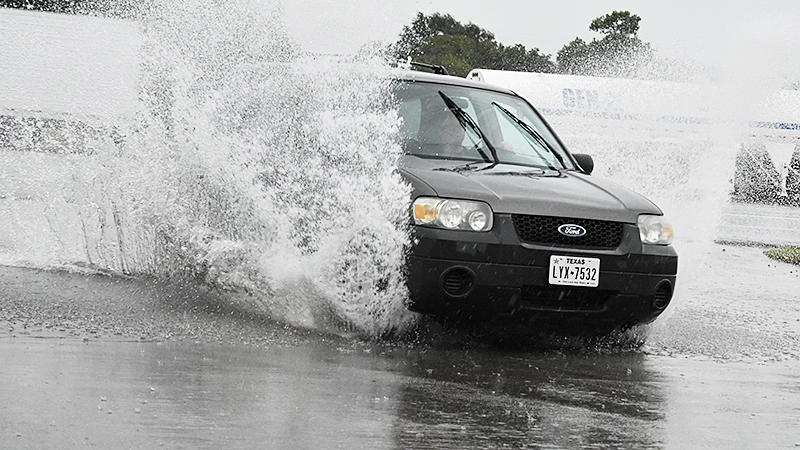 A Ford SUV kicks up water Thursday morning in Port Arthur turning into a gas station off Memorial Boulevard.

All extension staff members in Port Arthur have been deployed throughout the city, city manager Ron Burton said Thursday morning, to assist residents in the middle of the impact of Tropical Depression Imelda.

Burton reported all of the city’s drainage pumps are working to full capacity.

“We are constantly taking reports where roads are impacted, but we don’t have too many of those reports,” he said.

When asked about any areas most impacted, Burton asked that heavy vehicles should avoid traveling 67th Street and Garnet Avenue in the Port Acres area so that they will not create ripples to cause homes to be flooded.

“In spite of all this weather, trash pickup is still on route,” Burton said. “We have not suspended trash service as of yet.”

All of the city’s heavy equipment, including dump trucks, are safe, Burton added.

Burton said he has been working with Port Arthur emergency management coordinator and Deputy Police Chief John Owens to make sure the Bob Bowers Civic Center is open and available for people who need shelter.

If all else fails, Burton advises those in need to call 911.

The Central Mall area has flood conditions. PA Transit will not be operational for citizens using Routes 4 and 5; those routes will be staged at the Public Library until further notice. This includes para-transit schedules. However, Routes 1, 2, and 3 will continue operating the normal schedules, including para-transit lines.

Do not attempt to travel down the following areas/streets: 5100–5200 block of 6th Street. 63rd and 64th Streets 2900-3400 blocks of 39th Street These roads are currently under water in spots. Please shelter in place, and avoid travel until the water subsides. The City will provide updates and status as reports become available.

Streets crews report that the underpass at Highway 73 and Savannah Avenue is under water. The City asks that residents find an alternate route, until it is safe to travel. Streets crews report that 7500 block to 8500 block of 9th Avenue is under water. None of Jimmy Johnson Blvd is passable; none of Blackberry Lane is passable. The City asks that residents shelter in place, until it is safe to travel. Additional updates will be posted as they become available.

Citizens in the Montrose, Dominion Court, and Dominion Ranch areas should shelter in place; avoid driving vehicles until water subsides to a safe level.