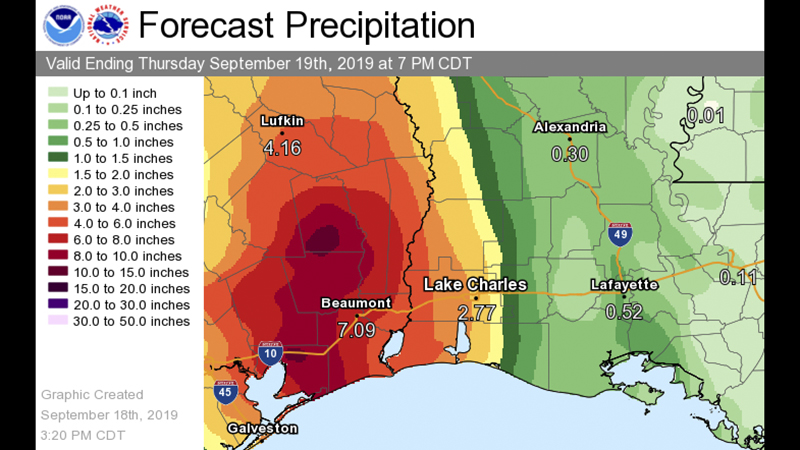 From the National Weather Service in Lake Charles.

The National Weather Service is predicting 6–12 inches of rainfall through Thursday. Tyler, Jasper, Hardin, Jefferson, and Orange counties can expect the highest chances of flash flooding, and Drainage District 7 has been put on storm duty to handle the water.

“Typically with these tropical systems the heaviest amount of rain occurs at nighttime,” said Roger Erickson, warning coordination meteorologist at the National Weather Service in Lake Charles, Louisiana. “No matter who gets it, whether it’s Port Arthur or further north of Beaumont or Kountze, it just depends on where the heaviest rain bands come up.”

Ronnie Hollier, supervisor for DD7, has implemented two 12-hour shifts in preparation for the coming rainfall.

“Because of the time the storm was arriving, we started at 4 a.m. and we’ve been on storm duty,” Hollier said. “We have a crew out manning stations, and we’ll continue these two shifts until the storm is gone and the system is back to normal.”

Erickson said drivers should be careful about driving through flooded streets, and should find another route if the driver is uncertain about the depth of the water.

“We will be issuing flash flood warnings if we think there’s going to be hazardous driving conditions,” Erickson said. “Obviously we would rather people not drive around late tonight in the middle of the storm. If you have to be driving tonight, just be really vigilant on how deep the water is that’s out there on the roads tonight.”

Tides have also been 1–2 feet above normal, which, along with the rain, can cause further flooding along coastal areas, Erickson said.

Hollier said as of Wednesday afternoon, with the rainfall seen so far, DD7 has been managing the situation.

“So far it hasn’t been that bad — it’s been raining but it’s a slow steady rain, Hollier said. “I’m looking at all of our ditches, and most of them aren’t even a quarter full. So we’re able to handle this pretty well. Hopefully it’ll continue like this.”

The rain should begin to lighten by Thursday afternoon, Erickson said.