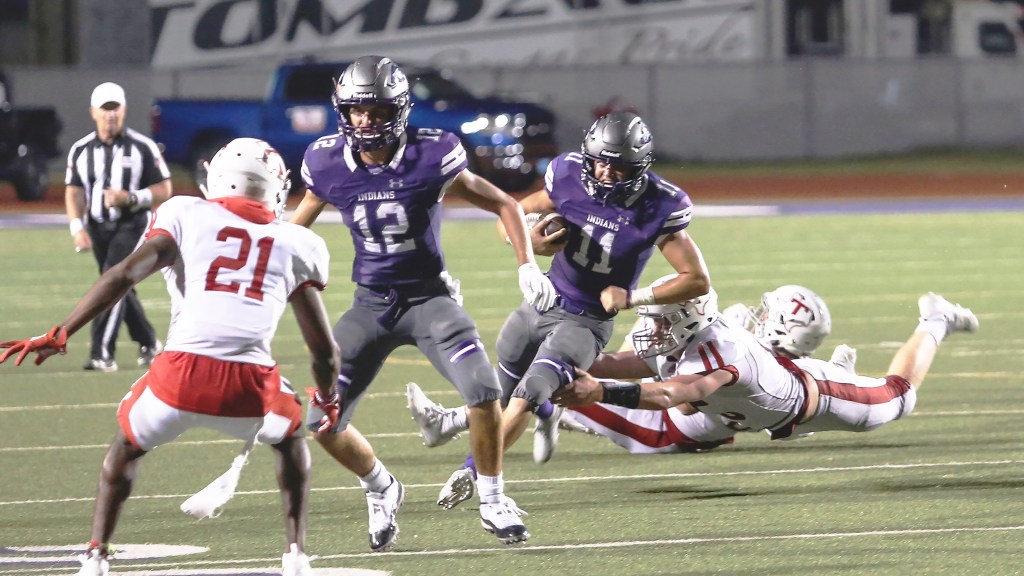 PORT NECHES — Zane Hernandez has been known to do it all.

With the exception of attempting a pass Friday in Port Neches-Groves’ home opener, he did it all pretty well.

“I had to step up,” Hernandez said. “We didn’t have anyone else.”

The Indians’ backfield faced with injuries, Hernandez turned in big yards and earned The News’ player of the week honor following two touchdown runs in a 28-9 victory.

Hernandez rushed six times for 98 yards. He gained 37 on a carry with 5:14 remaining to all put away the Cougars (1-2) and leave the Indians 2-1 going into the bye week.

“He’s one of our three guys” who run the football, Indians coach Brandon Faircloth said. “Dejaunte [Conner] was having a back issue, and Lance [Vaughn] started cramping. It’s just one of those things where you have to have three guys running the football in Southeast Texas. It gets hot and kids are cramping.”

Hernandez’s contributions were not limited to the ground. The senior caught three passes for 26 yards.

Just last year, Hernandez was a linebacker, but he favors offense.

“I’ve always been an offensive player,” he said. “When I moved to defense, I really liked it. I enjoy playing football.”

PNG gained 439 yards of offense to Tomball’s 210. That meant the defense managed to build on the momentum from the second half of Week 2 at Huntsville in which the Indians held the Hornets to 28 total yards.

“To be 2-1 against three really good teams is definitely something to feel good about,” Faircloth said. “Also, like any head coach will tell you, we have a long way to go. Going into the off-week at 2-1, it’s comforting knowing that we won some games. But like I told everybody, everybody’s 0-0. Everybody’s got the same record now. District is what counts now.”

PNG and Nederland in District 12-5A Division II, Memorial in District 9-5A Division I and West Brook and Beaumont United in 21-6A are all off this week and will resume with district play starting Week 5.

“We get a lot of time to prepare coming off a strong win,” Hernandez said. “We just need to keep that mojo.”

Other top performances from Week 3:

• junior Blake Bost completed 12 of 25 passes for 163 yards and a touchdown with an interception, and he rushed nine times for 52 yards and another touchdown;

• senior Peyton Proenza caught the touchdown pass from 47 yards out early in the second period and finished with eight catches for 84 yards;

• In Nederland’s 43-27 home loss to Silsbee, sophomore Kyndon Fuselier caught nine passes for 177 yards and a touchdown (on a 66-yard pass that helped pull the Bulldogs within 29-27 with 9:09 remaining);

• junior running backs Josh Mazyck and Kade Scott had respective touchdown runs of 56 and 52 yards and combined for 19 carries for 155 yards; and