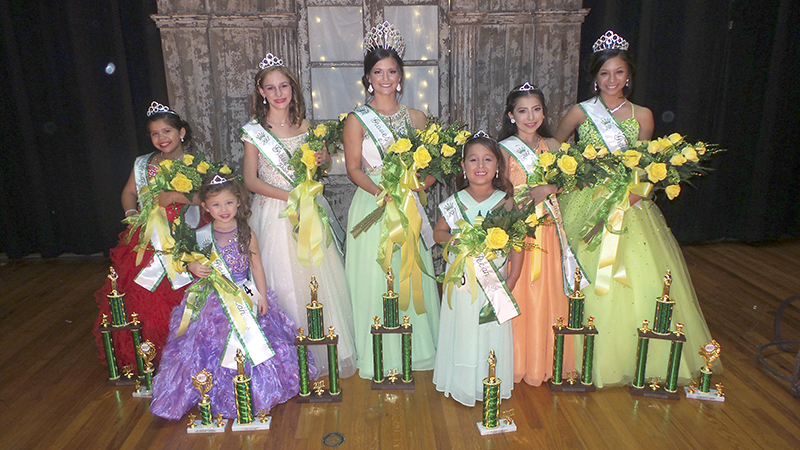 The Groves Pecan Festival Queen’s Scholarship Banquet Pageant has been a tradition at the festival since 1971, but it was cancelled last year for the first time. The last court to be crowned was in 2017. Pictured are, front left, Petite Miss Savannah Schrader, front right Little Miss Kayla Sol, back row from left to right, Duchess Sophia Ochoa, Junior Miss Hannah Walker, Queen Katelee Zampini, Countess Alesandria Cardenas and Princess Isabelle Colin. (Courtesy photo)

Ronnie Boneau, Groves Pecan Festival Director and executive manager for the Groves Chamber of Commerce, is excited for this year’s pageant turnout and is ready to kick off the festivities with style.

“We had to cancel last year’s pageant for the first time because we did not have enough girls sign up,” he said. “This year with help to get the word out by the community, mothers and girls, we ended up having enough — more than enough. We had 56 girls sign up this year back in May.”

The girls, who have to prep for the competition by attending a rehearsal Wednesday, also have to go through an interview process the morning of the pageant.

Boneau said the interview process has been particularly helpful to past winners, recalling a previous experience with a young queen.

“I’ve had girls when I was in the process of writing their scholarship checks want to chat and tell me about what they got out of the pageant,” he said. “One girl was going to enroll at the University of Texas, and she told me the most important thing the pageant taught her was how to react in interviews. She said it helped with a job interview and she was able to land a job at a law firm in Austin because of it.”

The pageant, which started in 1971, has remained mostly the same. Boneau said the focus is on education, community involvement and camaraderie.

“It’s just one more event that the community gets to be around,” he said. “Those who are in the pageant have to either live in Groves or go to a school in Groves. It’s a big deal for them. It’s the camaraderie, it’s fun and it’s wonderful to watch the families come in, support the girls and help them get all dressed up.”

2017 Queen, Katelee Zampini, said she has been a part of the Groves Pecan Pageant since she was five years old and enjoyed being able to represent her hometown.

“The Pecan Pageant has taught me to always be myself, to be a good role model for the little girls who look up to me and to always be humble,” she said. “I use the skills I learned pageanting every day by being true to myself and being the best person that I can be. I will never forget being the 2017-19 Groves Pecan Queen.”

Boneau said he never thought he would like working at a pageant, but has quickly learned to love the process and all it brings.

Boneau said he wants to encourage the community to come out and show their support.

“If the community shows that they come to the pageant or festival, it means a lot because we can keep doing this,” he said. “Without their support, the outcome wouldn’t be very good. The community needs to show the girls that they are interested in what they are doing and keep the pageants going.”