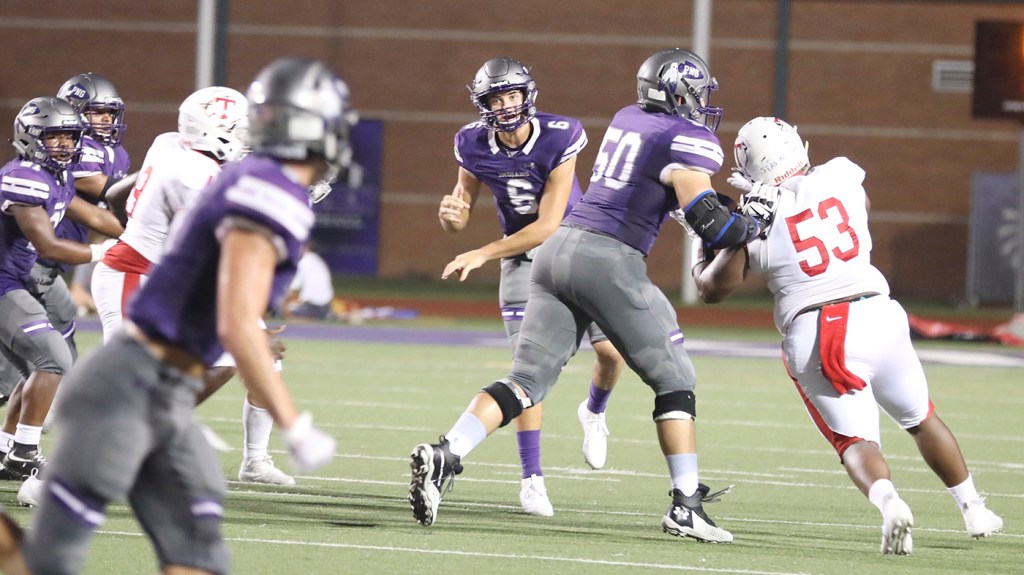 PORT NECHES — The Port Neches-Groves Indians agree with Dorothy and Toto that there’s no place like home.

The Indians, playing their first home game of the season, gave their purple-clad faithful plenty to cheer about in a 28-9 win over the Tomball Cougars on Friday night at The Reservation. It was the 600th win in PNG history.

PNG used a stellar defensive effort, holding Tomball to just 41 in the opening half. The Cougars had just one first down over the first two quarters. 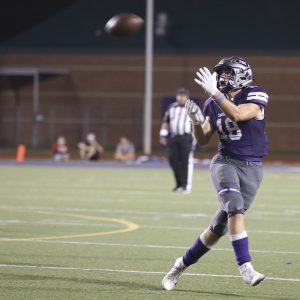 Ryan Sosa of PNG catches a pass in the open field against Tomball on Friday in Port Neches. (Leo Weeks Photographers) 9-13-19

The Indians opened the scoring with 1.5 seconds left in the first quarter on a 2-yard run by Zane Hernandez. Tate Sandell converted the PAT to give PNG a 7-0 lead. The Indians made it 14-0 with 9:20 remaining in the first half when Blake Bost hit Peyton Proenza with a 47-yard TD pass.

Tomball came out on fire to start the second half, getting back into the game on the opening drive of the third quarter, The Cougars got on the board when Emil Asif made a shoestring catch of Hunter Dunn’s pass for a 1-yard TD pass. The Indians blocked the PAT attempt to leave the score at 14-6 with 7:50 remaining in the third quarter.

“I was really proud of our defensive effort,” PNG coach Brandon Faircloth said. “They made some adjustments at halftime, but our defense never gave up and kept playing.”

Tomball cut the PNG lead to 14-9 with 5:14 left in the third quarter on Jacob Jordan’s 21-yard field goal after the Indians put up a goal-line stand.

That stand seemed to spark the Indians, who broke the game open with a pair of fourth-quarter touchdowns. Bost scored on a 2-yard run to make it 21-9 with 7:55 left. The defense came up with another stand deep in PNG territory, as linebacker Gavin Deslatte made a huge tackle on a fourth-down play. The Indians quickly marched down field, capping the drive on a 37-yard run by Hernandez to make it 28-9 with 5:14 remaining in the fourth quarter.

“It was great to finally be home. There’s no better atmosphere than PNG football on a Friday night,” Faircloth said. “Our players feed off our fans, our band, our twirlers all of them. It’s a huge advantage to our football team.” 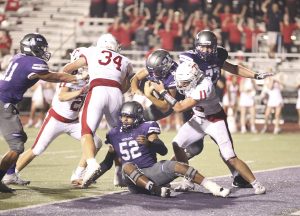 Blake Bost of PNG dives for a touchdown against Tomball on Friday in Port Neches. (Leo Weeks Photographers) 9-13-19

PNG linebacker Gavin Deslatte came up with a huge tackle on fourth down to stop a Tomball drive with the Indians holding a 21-9 lead in the fourth quarter. PNG took advantage by driving down the field for another TD to put the game out of reach. Deslatte also had a hand in a goal-line stand late in the fourth quarter to stop Tomball to keep the score 28-9.

PNG running back Zane Hernandez, who ran for 98 yards and two TDs. Hernandez had a highlight-reel run on his second TD, a 37-yard scamper to make it 28-9 in the fourth quarter. Hernandez’s second run seemed to take out whatever life was remaining in the Cougars.

The Indians have a bye next week before hosting Baytown Lee at 7:30 p.m. Sept. 27 in PNG’s annual Homecoming contest. Baytown Lee was 3-0 after Friday night’s action.

“I think it’s good to have a week off before district starts. We have a lot of things we have to work on,” Faircloth said. “We have two weeks before our next game. That’s two weeks of work, and we’re going to go back to work on Monday.”