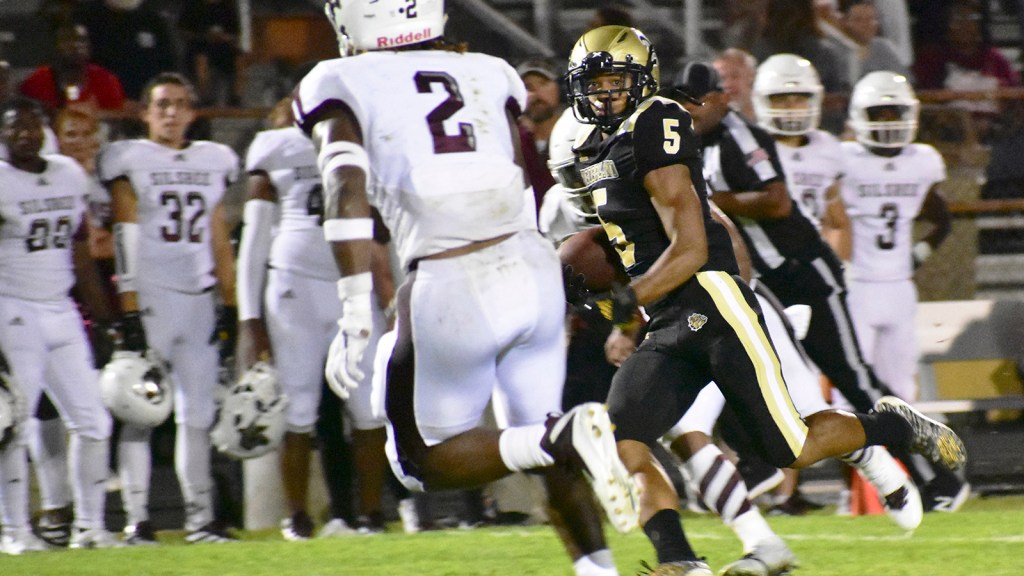 NEDERLAND – If big play offensive football was your cup of tea, then the place to be was Bulldog Stadium.

Scoring early then scoring late, the Silsbee Tigers rolled up 536 yards total offense and took advantage of a pair of Nederland fumbles in the final four minutes to seal a 43-27 victory here Friday night. 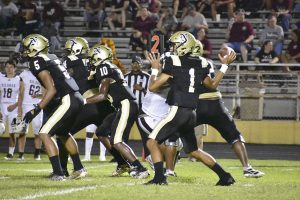 Nederland quarterback Bryce McMorris winds up for a pass and gets blocking help from his backfield agaisnt Silsbee on Friday in Nederland. (I.C. Murrell/The News) 9-14-19

It was a nightmare for defensive coaches.

Although the Tigers had dropped their first two contests, Nederland coach Monte Barrow knew his defense might be in for tough night against a Silsbee running back tandem of Dralyn Taylor, Chris Martin and Antonius Arline. This standout trio had nearly 4,000 yards and scored 38 touchdowns a year ago. Then Friday night they displayed this same offensive prowess against the Bulldogs.

Taylor ran for 200 yards on 12 carries, Martin added 103 yards on the ground and scored a pair of touchdowns, while Arline was incredible with two touchdown receptions of 72 and 76 yards. Taylor had run of 72, 70, 26 and 12, while Martin chipped in with a 70-yard dash of his own. 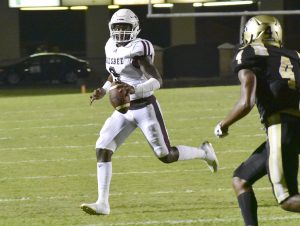 Silsbee quarterback Raymond Foster keeps the ball as Nederland linebacker Kerrington Broussard closes in on him in the second quarter Friday in Nederland. (I.C. Murrell/The News) 9-13-19

Nederland, on the other hand, also had a very good offensive night with 392 yards total offense. Keying the Bulldog attack was Josh Mazyck with 79 yards on 12 carries, including a 56-yard touchdown gallop.

Bulldog senior quarterback Byrce McMorris, when he had time, was outstanding through the airways. He completed 14-of-26 passes for 251 yards and and scores of 66 and 12 yards.

Junior wide receiver Kyndon Fuselier, who had a fantastic night with 9 receptions for 177 yards, raced 66 yards on a quick pass from McMorris to cut the Silsbee lead to 29-27 with 9:10 left in the contest. Nederland went for two but was stopped short.

Nederland’s defense stiffened and forced the Tigers to punt again, but the Bulldogs fumbled away the kick at their own 33. From there Silsbee went 33 yards in five plays to put this one away. Martin caught a 12-yard touchdown pass from Raymond Foster (8-12-211, no interceptions) to make it 35-27. Gonzalez’ kick gave the visitors a 36-27 lead with four minutes left.

The Bulldogs trimmed the deficit to just 29-21 as McMorris tossed to Bryson Garrett, who dipped and darted into the end zone from 12 yards out. Barrow drilled another PAT with just 7 seconds gone in the fourth to cut the Tigers’ led to just eight points, 29-21.

Silsbee added yet another long touchdown on its second play of the half as Arline, coming out of the backfield, took in a perfect pass from Foster and outraced the Nederland secondary to touchdown heaven 76 yards away. Taylor ran in the two-point conversion and it was 29-14.

Taylor led the way in the first two periods with 192 yards rushing on seven carries. Chris Martin also added 88 yards on the ground for the Tigers.

Silsbee finished the half with 402 total yards, while the Bulldogs first half offensive performance was also very good with 228 total yards. Mazyck led Nederland with 78 yards on the ground, while Scott was adding 59 yards on just 3 carries.

The Tigers went 84 yards in only seven plays culminating in a Foster 1-yard dive with 2:03 left in the second.

It was one of the wildest 1:24 in Texas as Silsbee jumped out to a rapid 14-7 lead with some fans still trying to find their seats after just four plays in the contest.

On the second play of the game, Taylor took pitch around right side and sped 70 yards untouched for the first score of the contest. When Diego Gonzalez’s PAT was perfect, Silsbee led 7-0 with just 0:48 gone in the game.

And on the Tigers’ third play of the game, Arline took a quick screen right from Foster and dashed 72 yards to paydirt. Gonzalez’ kick was perfect.

The Bulldogs defense came to life in the second quarter and two plays later after taking over via a punt at their own 49, the hosts knotted things up at 14-14.

Kade Scott displayed some of the speed Silsbee showed early in the game as the as 180-pound junior bolted 52 yards off right tackle for the Bulldog score with 4:41 left before intermission.

Bulldog running mate Mazyck had tied things up on the game’s fourth play with a 56-yard dash of his own at the 11:00 mark of the first period.

Nederland, after Taylor’s touchdown bolt on the game’s second play from scrimmage, jumped right back in it at 7-7 as Mazyck took a handoff on the right side and raced 56 yards for a Bulldog touchdown. Payne Barrow’s kick was good and it was 7-7 and only 60 seconds had elapsed in the game.

On a fumbled Nederland punt with less than 5:00 to play as the Tigers turned the turnover into points pushing their led to 36-27 late in the fourth quarter. Silsbee put the game on ice by recovering another Bulldog fumble with just over 3 minutes to play and scored again to stall the Nederland comeback.

The Silsbee running back tandem of Taylor, Martin and Arline, who scored four touchdowns, rushed for 320 yards and had 201 yards receiving.

Following a week off, Nederland will open district play with a road game at Santa Fe on Friday, Sept. 27. Opening kickoff is slated for 7:30 p.m.