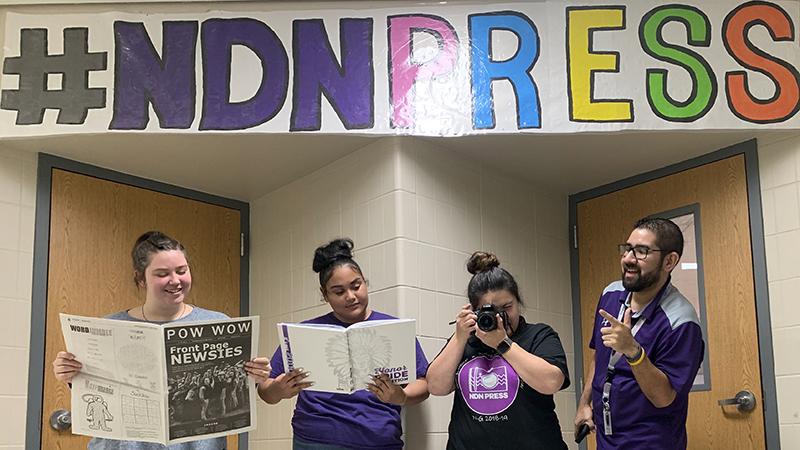 PORT NECHES — Port Neches-Groves High is the only school in Mid-County with a certified journalism program, and for the past two years, it has been undergoing a revitalization with head instructor and former journalist Mike Tobias.

Tobias took over the journalism program after spending time at the Beaumont Enterprise as the sports editor.

He has 16 years of experience as a journalist and since his arrival has made several significant changes, including branding, creating social media and the NDN (pronounced Indian) Press website.

“When I first got here last year, I sort of knew we needed an identity but I didn’t know what to use,” he said.

“The yearbook is called ‘War Whoop,’ the newspaper is ‘Pow Wow’ and photography was photography. I didn’t know which entity was bigger, had a bigger class or if one was more important than the others. I knew I needed to have one thing that showed who we are as a whole.” 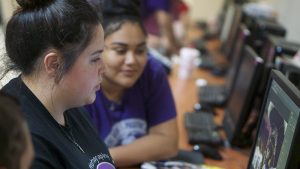 T hat’s when he saw a shirt that said NDN Press, and the first thing he did was find a graphic design student who could turn it into a logo.

“Now, it’s what people know us by,” he said. “When people hear it they say, ‘Oh, you guys are the newspaper, the yearbook and the social media people!’”

Once they established themselves as a known presence on campus, Tobias said they expanded their talents to include social media by starting Twitter, Facebook and Instagram pages.

Previously, everyone saved their good photos for the yearbook to come out, “which An Instagram account was created, and that took off last school year as a way to show school work and student photography. 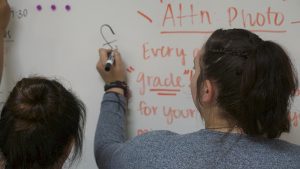 Since last year, the Facebook page has received more than 2,700 followers.

“A lot of the athletes are on Twitter,” Tobias said. “The kids are on Instagram, Twitter and Snapchat, while the parents stick to Facebook. We get a lot of reactions that way. With the website they can see their photos and stories online first as well.”

The program’s first social media editor, senior Rachel Garin, said she loves being involved on campus and interacting with students through social media.

“I started doing it at Mid-County Madness,” she said. “I liked the way I got to interact with the football players, the Indianettes and the student section. You see the tradition in the school. That’s what I like about NDN Press. We’re all like a family. Social media is a big part of our world right now, it’s fun and we like the interaction between us and the community.”

The PNG journalism program has had three teachers in the last four years, but Tobias said he has seen a spike in students since he started. The program jumped from one intro to journalism class with six students to three with 25 students each. 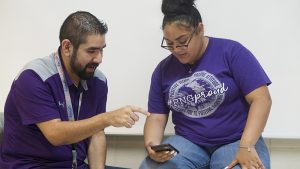 “We’re a source of student news, as far as letting people know what’s going on,” he said.

Second-year editor of ‘Pow Wow’ senior Brittany Batson started in the program as a freshman and has enjoyed seeing it grow.

“This year and last year, kids want to go to the events and they have the motivation to do the stuff we have to do,” she said. “It’s exciting. Watching people go from having no idea what NDN Press is to noticing us in the hallway and calling us out in class has been really cool.”

Tobias said the journalism program is important to start at young age because the world needs more journalists.

“It’s important to get this skill set,” he said. “They need to know how to use social media across several platforms, how to shoot a camera on manual, etc. Everything I’m teaching them how to do is what I’ve learned and used in my career. It’s our job to tell the story of PNG. No one else is going to do it but us.”

For more information visit the ndnpress.com or any of their social media pages.