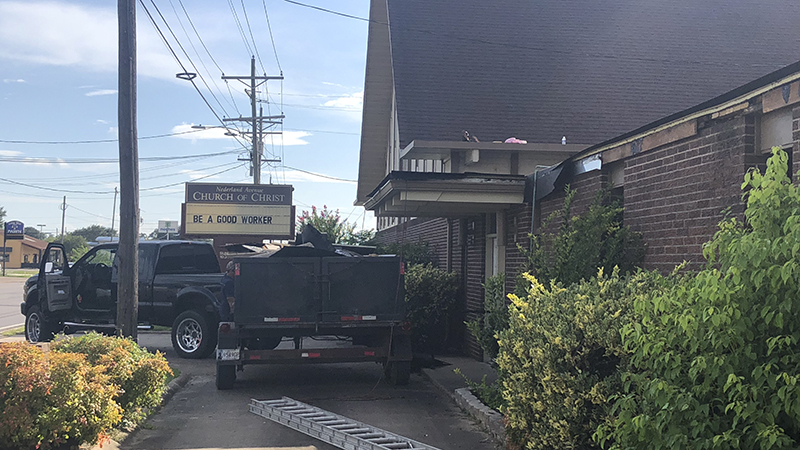 The Nederland Avenue Church of Christ sign reads ‘Be a good worker’ in honor of Labor Day as workers replace the roof of the classroom building on Tuesday. (Brad Robichaux/The News)

NEDERLAND — A house of prayer also needs to be kept up like a regular house.

Nederland Avenue Church of Christ knows this well, as it works to replace the roof on its 68-year-old building, the church’s first when it moved to 2300 Nederland Ave.

It was constructed in 1951 for $85,000 by L.B. Nicholson & Van Cleve of Nederland on three lots purchased from the Doornbos Estate. The building used to serve as the auditorium with a capacity of 300, but now houses the church’s classrooms.

Despite its age, the building has lasted remarkably well, says pastor Michael Williams. 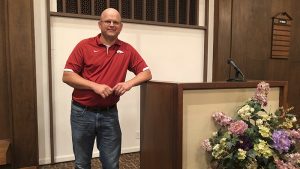 “A lot of the things that you buy, like computers or printers, you buy them and then you throw them away because they’re cheaply made, they’re not designed to last a while,” Williams said. “But this church is well built, over the years it’s even withstood the hurricanes.”

The church in particular withstood Hurricane Harvey, quite well, suffering some minor water damage in the entry way and some roof damage that might have been sustained through the years before the storm.

“We didn’t have much damage to speak of,” Williams said. “It was minimal, comparatively speaking, to what others went through. We were fortunate.”

Fortunate enough that the church opened its doors to help distribute emergency supplies after Harvey, keeping pallets of supplies donated from the Church of Christ Disaster Relief program out of Nashville, Tenn., and maintaining lines of hurricane victims that wrapped around the building as they passed out the materials. 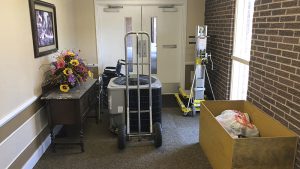 A new air conditioner unit is ready to be installed at Nederland Avenue Church of Christ on Thursday. (Brad Robichaux/The News)

Part of being such a help to the community requires upkeep, though. The flat roof of the old classroom building is rotting, falling apart from retaining water, and the church is spending $45,000 for its replacement.

“We’ve saved up over time,” Williams said. “Most of it we had through savings to do it. We’re not necessarily going into debt per se, we’re just trying to do it as we get the comfortability to be able to pay for it along with other ministries. We just attack them as we need to and as ability arises.”

Some of those ministries include the Mexico Ministry. Begun in the 1970s after Hurricane Chantele came through Mexico, former pastor Foree Grove learned to speak Spanish, went down to Mexico and surveyed the needs of churches devastated by the storm.

The church shipped religious curricula, Bibles and Grove himself preached in Spanish to a group of 400 people in a backyard, according to the church’s history.

The ministry continues today, which Williams says donates approximately $50,000 in goods and labor a year to Mexico and other Central and South American Spanish-speaking countries. 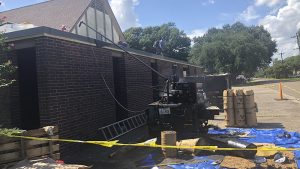 Workers replace the roof of the 68-year-old classroom building at the Nederland Avenue Church of Christ on Thursday. (Brad Robichaux/The News)

Other ministries include a Vacation Bible School, its various youth ministries and its annual back-to-school giveaway, where parents and students peruse donated school supplies, backpacks and other home products before school starts. The church is also looking to continue as part of the national GriefShare program after it offered a successful first year of the ministry.

To keep up, Williams and the church need to maintain its buildings.

“We try to invest in the property to keep it appealing and somewhat contemporary-relatively speaking,” Williams said. “We don’t necessarily hire a designer, but we paint and redo carpet surfaces to keep it updated.

In addition to the roof, the church is also replacing its central air conditioning unit for the office area after the unit broke down this summer. Air conditioning units were replaced three years ago for the current 500-person auditorium, which was built in 1964 for $180,000, according to church history.