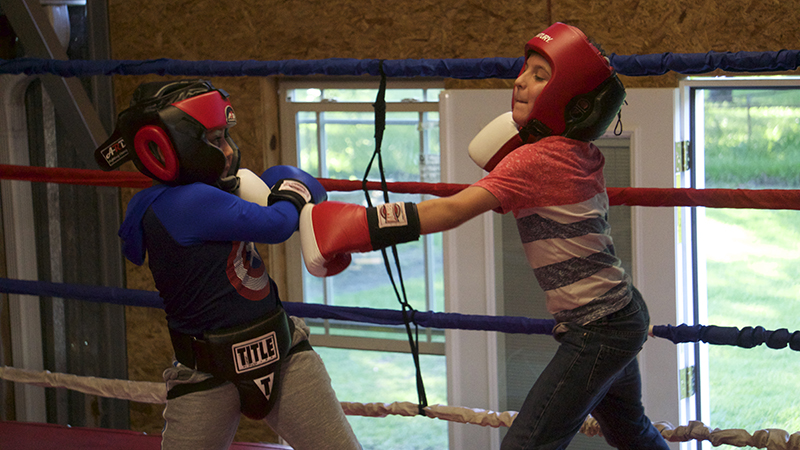 For Mario Flores it all started with a dream to one day own and operate his own boxing gym.

What started as a simple way to engage and exercise with his sons soon helped his dream develop into a reality.

Titan’s Boxing Gym, located at 3015-3037 25th St. in Port Arthur, opened its ring in 2012. Now, his son, Ernesto Flores, carries on his father’s name working side by side as an assistant coach and mentor. 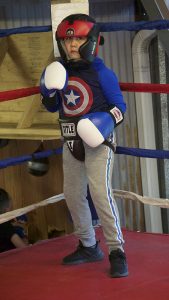 Eddie Guerrero, 8, started taking lessons at age 6 when he joined Titan’s Boxing Gym. He prepares himself for a sparring duel during a Wednesday evening class. (Cassandra Jenkins/The News)

“My father was in love with boxing,” Flores said. “When we moved over here from Florida he just wanted me to be involved in something after school instead of just laying around the house, so he found a gym.”

Flores said they started working out at Lion Hearted Gym before his father finally decided to open his own gym with only the money he had in his pocket, a small plot of land and an empty garage.

“It was only a single garage, four heavy bags and a mini ring,” he said. “Time by time we developed. Now, we want to continue that growth, make it even bigger and launch a youth program.”

Flores said they have up to 30 children and teens in one class, some starting as young as age 7. 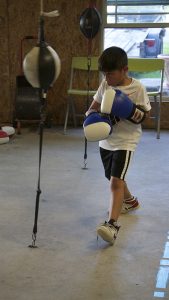 Diego Sanchez, 7, is the youngest student at Titan’s Boxing Gym. He practices his warm-up Wednesday during an evening class. (Cassandra Jenkins/The News)

“(Mario) wants to not only help kids inside the sport of boxing, but kids outside the sport,” he said. “He wants to help people continue their education, keep them from going down the wrong path of life and start something that can make a difference.”

Flores said him, his dad and twin brother take the sport very seriously.

“We want to take boxing to a whole other level,” he said. “Not to win for fighting, but to win at life. Helping out the whole city of Port Arthur as one — that’s what we really want to do. This program we want to create is something that Mario has dreamed of since the first day he opened the gym and from the moment he mentioned it to me, I knew that’s what we wanted and needed to do.”

Discipline, leadership, respect and friendship are a few of the qualities Flores said they try to help instill in the students and children who come to their gym everyday and practice.

“We want them to be educated,” he said. “Everyone can have a better life and that’s what we want for the kids in this gym. We want them to be happy. They can compete, represent where they are from, win belts, trophies and make new memories. We want to help the kids, the teenagers and adults.” 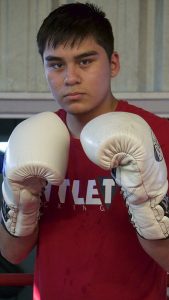 Ernesto Flores, assistant coach at Titan’s Boxing Gym, along with his father, Mario, helped open the gym in 2012. Ernesto, a recent graduate of Memorial High School also helps maintain the gym, teaches classes and participates in the sport himself. (Cassandra Jenkins/The News)

To launch the youth program, Flores said he and his family are reaching out to the community and businesses of Port Arthur to help fund the idea.

He says they need a new building, adding the bags and ring take up a lot of space. “We need funds to maintain the gym and buy new equipment,” Flores said. “Sometimes the struggles the kids go through don’t allow them to have enough money to buy their own equipment.

“We are hoping to get some form of transportation. Every weekend we try to take the kids to the seawall because they love running over there, but we want to also be able to take them to see some fights and local events.”

Future goals include creating a scholarship.

Flores wants the community know that Titan Boxing Gym is a good investment that will help change lives and impact futures.