Down but not out: Lutheran North’s talent shocked Sharks 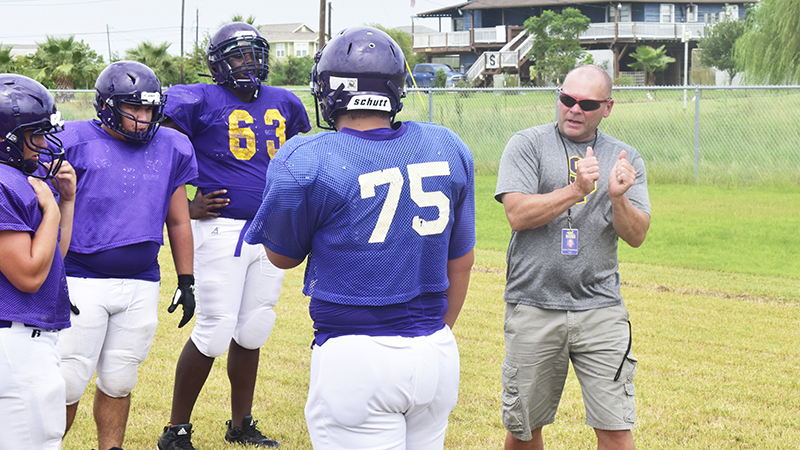 When Sabine Pass coach Jason Thibodeaux scheduled Houston Lutheran North this season, he didn’t have any idea how strong the Lions would be.

“They won two games last year, and one of the games they won was against a team we should have beaten,” Thibodeaux said. “We were looking at this record and figured this was going to be a good game to pick up.”

So, imagine the surprise the Sharks (0-2) felt during a 58-0 loss on the road Friday. The game was Lutheran North’s season opener.

Thibodeaux said Sabine Pass played an “impressive” first quarter before Lutheran North turned in some big plays that got their momentum going. The Lions led 42-0 at halftime.

“We’re still playing seven to eight players on both sides,” Thibodeaux said. “Some of the guys we need to get in are not ready yet.”

Despite two blowout losses to start the season, Thibodeaux is finding positives in a program seeking its first victory since their 2017 season against Burkeville.

Among the positives are a lack of penalties and a lack of attrition.

“We thought for sure, having a year off, we were going to get the delay of games and the false starts,” Thibodeaux said. “That’s something we haven’t had to worry about all year.”

The conditioning issues that arose following a 35-6 home loss to Pasadena First Baptist on Aug. 30 were solved in the following week. All 22 players walked away without injury and did not suffer any cramps.

“We were probably in a better position conditionally,” Thibodeaux said.

The Sharks could find more positive news in coming back home to take on a familiar opponent. The bad news could be that Hull-Daisetta (1-1) has dominated Sabine Pass in recent years.

“They run the same offense we do, so we know what they’re going to do,” Thibodeaux said. “They have some skill kids they brought up from [last season’s] eighth grade. If we can contain their skill guys on the outside and force them inside, we should have a chance.”

Even while being outscored 93-6 this season, Thibodeaux has no regrets about the Sharks being back on the field following last season’s early cancelation due to a thin roster. But after Friday, they’ll only have three more games before an unplanned 35-day break due to other teams having pulled out.

“I’m glad we’re even having a season,” he affirmed. “We’re keeping the kids’ morale up. We’re keeping them interested in playing, especially before this big break coming up.”

It gives him more lessons he can share with players who’ve already been through plenty in their high school careers.

“It’s all about life,” Thibodeaux said. “Sometimes, life is not fair. How do you stand up to that? … We just try to teach kids football is all about life. When adversity stares you in the face, what are you prepared to do?”