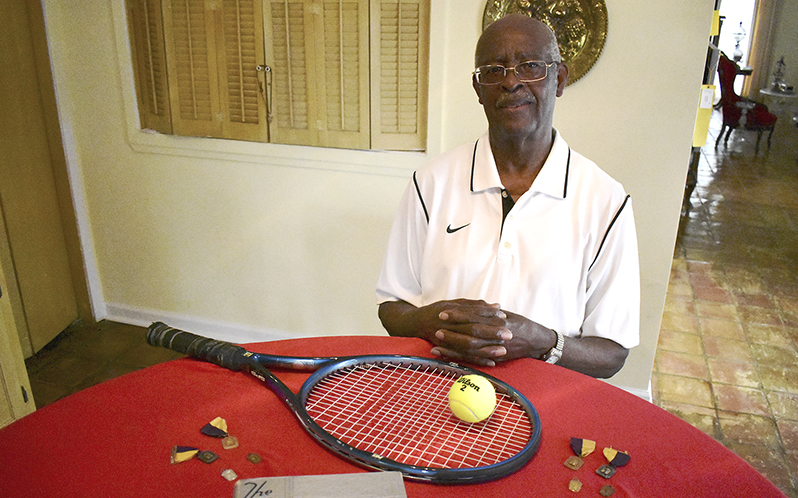 Levi Adams, shown at home on July 10, 2019, was a basketball and tennis standout at Lincoln High School in the 1950s. Adams was inducted into the Prairie View Interscholastic League Coaches Association Hall of Fame on July 20, 2019. (I.C. Murrell/The News) 7-10-19

Levi Adams wrapped up a stellar tennis career at Lincoln High School in 1955 with a state championship each in singles and doubles competition.

Although 64 years had come and gone, those associated with the Prairie View Interscholastic League Coaches’ Association remembered Adams’ achievements and inducted him into its hall of fame.

“I was surprised because it’s been so long,” Adams said July 10, 10 days before the induction ceremony in Houston.

Adams, who won more tennis titles at Huston-Tillotson College (now University) and played basketball in both high school and college as well, died Monday. He was 83.

Clifford Hardeman, a Beaumont resident, played with Adams at HTC. The two, who graduated in 1959, helped the Rams win three straight championships in the American Tennis Association, a league that hosted intercollegiate tournaments for historically black colleges and universities.

“Levi was a fun-going guy,” said Hardeman, who is originally from San Antonio. “He was always making people laugh and have fun. We played on the same tennis team for two or three years. During the time we played, we won about every tennis tournament we were in.”

Hardeman added he and Adams would talk almost every day, especially during major professional tennis tournaments such as the recent U.S. Open.

The Prairie View Interscholastic League, based at what is now Prairie View A&M University, was the governing body for black high school activities during segregation in the state from 1920-70. Levi Adams built a strong tennis resume at Lincoln, reaching the PVIL Class 3A state title match in at least one bracket (singles or doubles) three straight years, playing against athletes from Corpus Christi Coles each time.

In 1953, he teamed with George Mitchell to beat Curtis Lewis and Ferris McGarity of Coles in the doubles title match, but lost in the singles final to James Gerard. In 1954, Henry Hunt and Adams lost to James Clemons and McGarity in the doubles final. Then in 1955, Adams finally earned his second state gold medal beating McGarity in singles 3-6, 6-4, 6-3.

Adams played a key role in the success of Jefferson County schools in PVIL tennis. Beaumont schools Hebert and Charlton-Pollard combined with Lincoln for 10 PVIL state titles. This past May, Brandon Do of Nederland became just the second player from a Jefferson County school to win a University Interscholastic League state title and the first since South Park’s Pam Hill won four straight girls singles crowns from 1975-78.

Following graduation from HTC, Adams was employed in the Port Arthur ISD, mostly as a physical education instructor. He retired from Booker T. Washington Elementary as assistant principal in 1993.

He entered the PVILCA Hall of Fame on July 20 with Ken Washington, Lincoln’s quarterback from 1971-73, and former Beaumont ISD Superintendent Butch Thomas.

Adams, who would have turned 84 on Sept. 23, leaves behind his wife Sharon, whom he married July 18, 1964, their son Langston and his wife Angela, and grandson Langston Jr., 11.

“Levi was always nice and polite and smiling,” Hardeman said. “The very next time you met him, he was the same. He was a family man. He spent a lot of time with his grandson.”