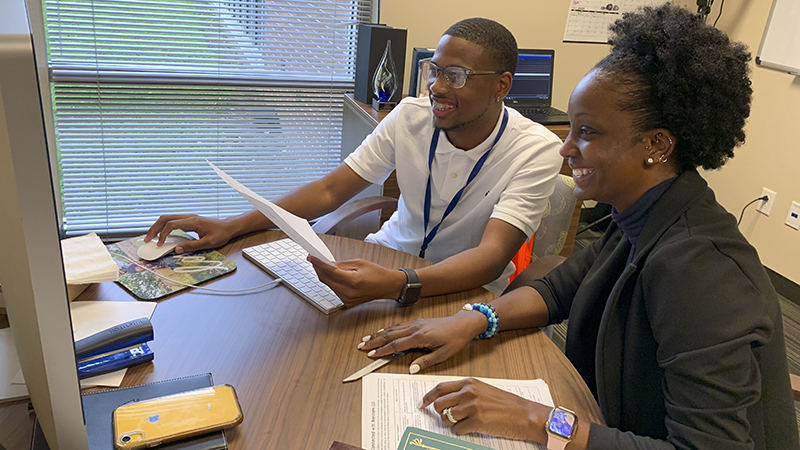 Dylan Getwood is only 17 — but you wouldn’t know it by looking at his résumé.

The Wilson Early College senior will graduate with a high school diploma and an associate’s degree of arts in general studies in May 2020. He will also have completed an internship in public relations for Port Arthur Independent School District, held office as the student council treasurer and led a fraternity youth group all by the time he turns 18.

Getwood has already set his plans for the future in motion and begun working towards those goals.

“I plan to travel to Tallahassee, Fla., to attend Florida Agricultural and Mechanical University to major in nursing,” he said. “After I graduate I plan to move back to Texas and start my nursing career at one of the big hospitals in Houston, Austin or Dallas. Then put maybe four or five years into the nursing field and enroll to Prairie View A&M’s online MSN program to get my masters in science and nursing administration.”

Getwood, who said he originally wanted to be a doctor, draws his inspiration from an aunt who is a nurse at Memorial Hermann in Houston.

“It’s a good field to go into,” he said. “It’s a demanding field, there’s a shortage on nurses, especially male, minority nurses like myself.”

Getwood said the program at Wilson is preparing him to attend a four-year university and start his future early.

“This semester I’m currently taking anatomy and physiology II, quantitative reasoning, history and American literature,” he said. “The program overall is a good program. It gives you a foot in the door to what college is really like so I’ll be ahead.”

During his time at Wilson, Getwood said he has learned a lot about responsibility, leadership and helping out.

“I help around in the office as an office aide for the assistant principal, secretary and counselor,” he said. “I help where my help is needed. Last year, I helped Dr. Lewis with the bookroom. I also help the freshmen students to and from class.”

Getwood and two other students are in the Wilson internship program, where they assist PAISD communications coordinator Kristyn Cathey.

Dylan is an asset to the department, and Cathey said she is thankful to have him and the other students helping the school district.

“They have young, fresh and innovative ideas,” she said. “Dylan really brings a lot of things that I probably couldn’t even do to the table. He is a leader here in this department. He’s a leader on this campus, and I hope that we will continue to have more students who work in this program at the Wilson Early College.”

When Getwood isn’t in class, helping around the office or doing his internship, he is working in a youth program called Kappa League. The national youth initiative of Kappa Alpha Psi Fraternity focuses on training youth for leadership, achievement and service.