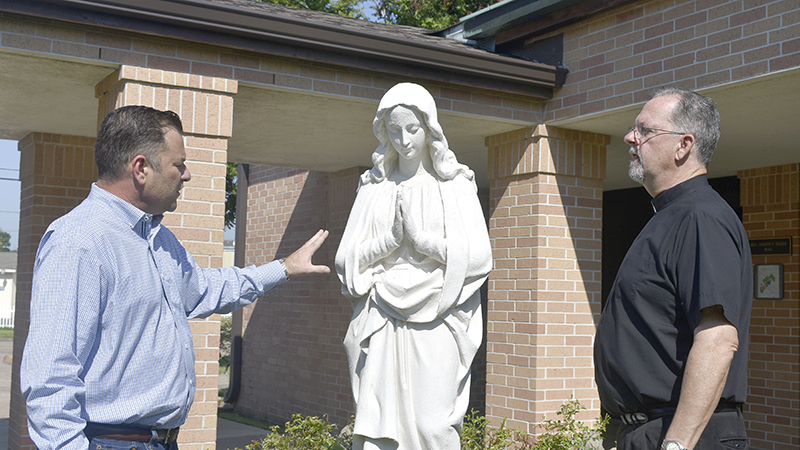 Ed Boone Jr., left, speaks with the Rev. John Hughes outside St. Charles Borromeo Catholic Church in Nederland on Thursday. Boone was given the statue, which once stood over the entrance to St. Mary Catholic School years ago, and donated it to the church so others can share in it. (Mary Meaux/The News)

Traffic moved along on nearby Nederland Avenue, the church’s congregants long gone from morning Mass on Thursday. The statue has likely led many souls in their journey of faith, just as she has had her own physical journey that began from an alcove above St. Mary Catholic School in Port Arthur.

The statue was placed above the doors to the Catholic school when it was built in 1935, the Rev. John Hughes of St. Charles Church said. A local man named Bill Leblanc drove past the school in 2011 when it was being torn down and asked what was going to happen to the statue — he went to school there years before, hence his keen interest in the statue.

He then contacted the bishop of the Diocese of Beaumont and asked for permission to have the statue. The Bishop gave him a letter to show the demo crew. The crew then wrapped it up and it went home to LeBlanc’s back yard.

“He had fond memories of going to school at St. Mary’s and he wanted to protect the statue,” Hughes said.

Ed Boone Jr., who owns a local business, was friends with LeBlanc and LeBlanc’s wife Jerry, knowing them through church. One day Boone was at their home and they began talking about the statue — telling him that when he dies he wanted Boone to have it.

LeBlanc, 84, died earlier this year and his wife decided to move to Houston, which left the statue in need of a home.

Boone, who had decided he wanted to donate the statue to a church, communicated with LeBlanc’s widow.

“Her and I both went through RCIA (Right of Christian Initiation of Adults for people converting to Catholicism). We both were Methodist and went through RCIA. We both felt it was appropriate to have the statue here,” Boone said.

The statue was put in place at the end of July and has been a focal point for many, Hughes said.

“Jerry said, when she came out and saw her, it is the absolute best spot it could be,” the priest said.

The response of the congregation has been great. Countless photos have been taken and people make it a point to “go and see the new statue.”

“Many have made that trip,” he said.

LeBlanc’s son is working to have a plaque made and plans are pending for a formal statue dedication ceremony.

But there’s more to the statue of the Virgin Mary than a work of art. It brings a peace, a calmness, Hughes said.

“It is a visual reminder of what Mary did for the Church in being the Mother of Jesus,” he said.