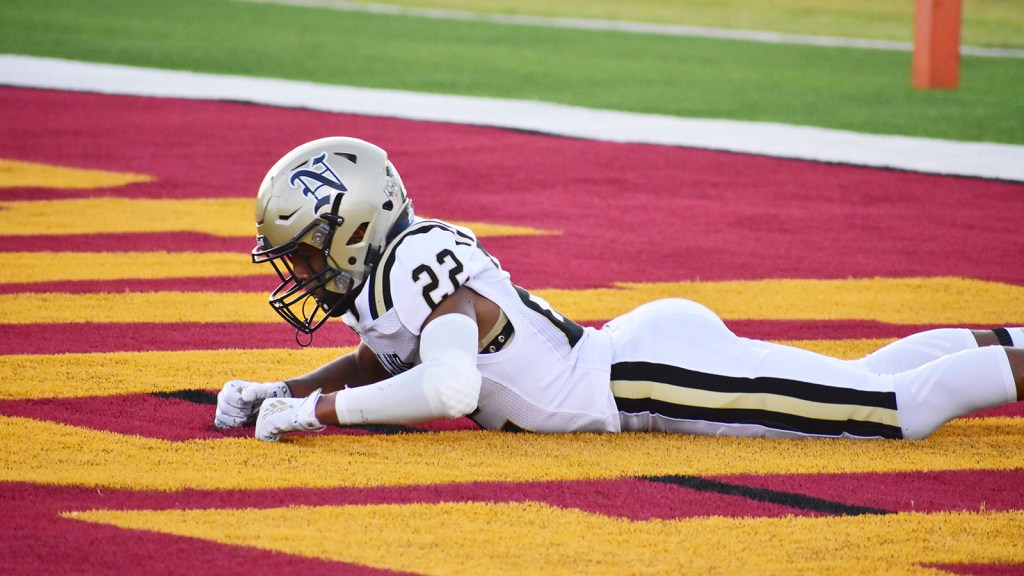 While the Bulldogs showed a promising effort during the first half, keeping the Timberwolves at bay, a shutout second half and dominating third quarter kept the Bulldogs out of scoring territory.

Nederland head coach Monte Barrow said he expected a tough effort from Beaumont United and will use the loss to help his team get better.

“Beaumont United is a good football team,” he said. “Their district opponents will find that out down the road. We knew that when we watched them on video and scheduled them two years ago. For us, we have to figure out how to bring what we do at practice to the game. Two games in a row we’ve shot ourselves in the foot, too many occasions with guys out of place and not taking assignments.”

Neither team made headway until Timberwolves starting quarterback Zemiah Vaughn hit a 37-yard pass to tight end Devin Hunt for the first touchdown with 3 minutes left in the first quarter.

Nederland returned the favor in the second quarter when quarterback Bryce McMorris got himself out of a tough situation by keeping the ball for 29 yards. An illegal hit out of bounds by the Timberwolves brought the Bulldogs up an additional 15 yards. Junior Josh Mazyck ran the ball the final 17 yards in two plays for the touchdown to tie the score at 7.

Just before the end of the half, Beaumont United defensive back Chandler Rivers picked the ball off at the Nederland 48-yard line and ran it back for a Timberwolves touchdown, 14-7. Shortly after, Nederland kicker Payne Barrow hit a 45-yard field goal before walking off the field to close the gap by three.

Beaumont United flipped the script in the third quarter, coming out of halftime unstoppable. The Timberwolves quickly put the game out of Nederland’s grasp with one touchdown coming from Vaughn, who ran the remaining 5 yards after three long hauls from his hand.

Running back James Wilson added another touchdown in the final 2 minutes of the quarter and received another halfway through the fourth on an 18-yard run. 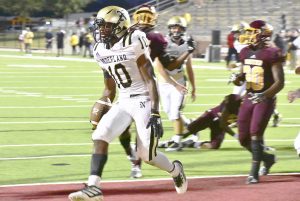 Josh Mazyck of Nederland scores a rushing touchdown in the second quarter against Beaumont United on Thursday in Beaumont. (I.C. Murrell/The News) 9-5-19

Beaumont United returned to the field after the half and was able to put the game out of the Bulldogs’ reach. Vaughn, along with the efforts of his offensive line, landed three long shots to his receivers to push up the score from 14-10 to 21-10.

The Timberwolves built momentum and Nederland was unable to bridge the gap in the fourth quarter. 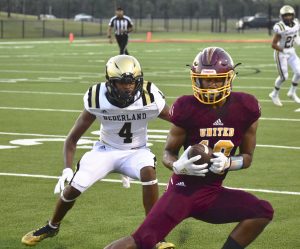 Kerrington Broussard (4) of Nederland defends Devin Hunt of Beaumont United on a reception in the first quarter Thursday in Beaumont. (I.C. Murrell/The News) 9-6-19

Junior Josh Mazyck, who ran for at least 107 yards and had his team’s only touchdown in the game.

“Josh runs hard,” Barrow said. “Part of me wants him to stop taking so many hits, but he doesn’t go down easy. I think he felt like he needed to carry a little more of the load with Kade [Scott] going out after the second play.”

Nederland will return to Bulldog Stadium 7:30 p.m. on Sept. 13 to face Silsbee.

“We’ll go back to work and spend the bye-week after Silsbee [learning] more about us,” Barrow said. “We’ve got plenty to fix for us. Our main focus will be on the Nederland Bulldogs.”