‘They teach us so much’: Surgical tech program a success 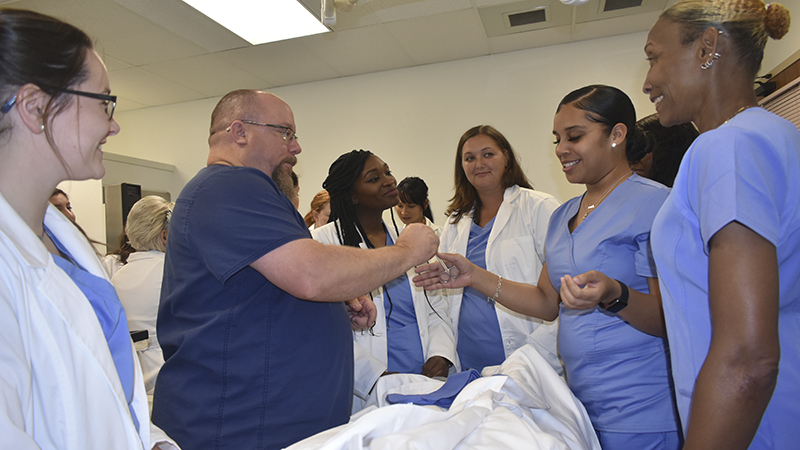 Surgical instruments, overhead lights, patient monitoring machines and even a lifelike dummy on a stretcher await the surgical technology program students in a lab at Lamar State College Port Arthur.

Inside the room, Clinical Coordinator Truman Hare stands next to the mannequin that is draped with a sheet as Brook Cordell, LaPrecious Grant-Moore, Angel Decker, Jazma Johnson and Roslyn Sutton eagerly watch. This is early in the course and these are first year students just becoming familiar with the “sea of silver” as Surgical Technologist Program Director Brandon Buckner calls the multitude of surgical tools.

The students ask questions as Hare demonstrates how to correctly hand a surgical instrument to a surgeon. This knowledge is vital to all on the healthcare team and to the patient.

The program continually turns out board certified graduates in the sought-after medical field with such a success rate the program earned a National Merit Award for achieving a pass rate in the top 10% of surgical technology programs in the U.S.

“This year most of the graduates had a job before they crossed the stage; six at St. Elizabeth (Hospital), three at Baptist (Hospital), one was hired at The Medical Center and one more will be hired there,” Buckner said. “We are a national program and our graduates can go to any state and work.”

And indeed they do. One graduate is married to a person who is active duty military and stationed in Colorado. She stayed at LSCPA for her last semester, and then graduated. She was able to join her husband and get a job in Colorado. 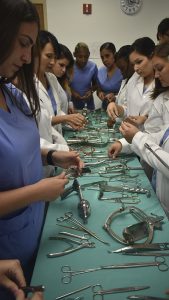 Buckner has the stats to show how successful the program at LSCPA really is.

Hare, who was one of Buckner’s students, credits Buckner with the success.

“He’s the reason why we have such a high passing rate,” Hare said. “We have people who have never been in a medical setting and the light bulb comes on.”

Jessica Nava is an August 2017 graduate of the program who works as a cardiovascular surgical technologist at The Medical Center of Southeast Texas. Her job is rewarding and she said there is a lot of camaraderie in her field and her team is like no other.

Her team, she said, looks out for her.

“I learn so much from my team, the nurses, doctors, tech who sterilizes the instruments, they teach us so much,” Nava said. 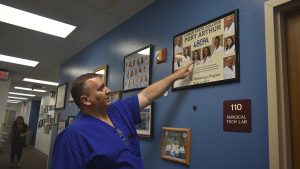 Students in the surgical technology program are Allied Health professionals that take the same courses as nurses.

Buckner said there are five prerequisite curses needed to get into the program — Anatomy 1 and Anatomy 2, microbiology, basic nursing and medical terminology and students are admitted in based on grades.

Currently the program is at its maximum enrollment of 16 students.

“They are all supervised by a preceptor,” Hare said. “They don’t just scrub in on the case with the surgeon by themselves. It’s the team plus one student.”

Buckner said the clinical rotations are like a yearlong job interview. It’s at this point that hospitals begin to pick which students they may want to hire upon graduation and certification.

A surgical technician can easily find work locally or nationally due to the demand in the health care field.

“And this degree is a springboard to other degrees,” Buckner said.

Persons with this degree can become certified in specialty areas such as working with cardiovascular, dermatology, orthopedics and more.

Wages for surgical technicians average about $22 per hour.

“Every hospital in Southeast Texas hires our graduates,” Buckner said. “Our graduates work in some of the finest hospitals: Texas Children’s, MD Anderson, Dallas, Austin, Fort Worth.”

Nava echoed his words, saying the fact that so many graduates come from Port Arthur and go on to work with renowned surgeons is mind-boggling.