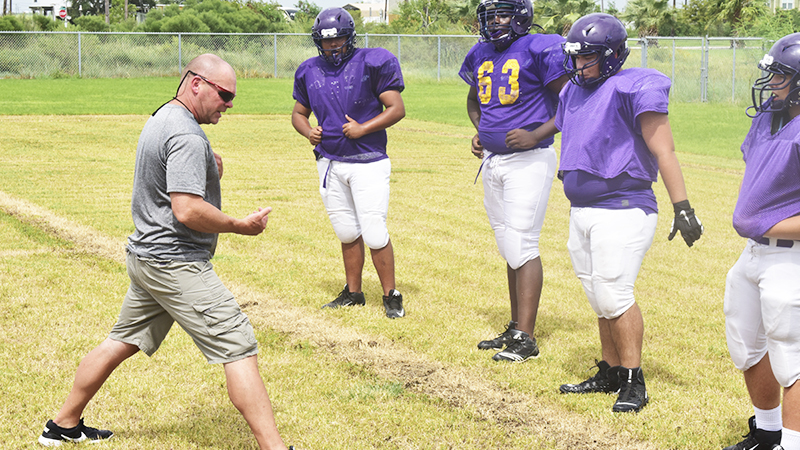 Down 16-6 at halftime, Sabine Pass’ return to football after nearly a full year wasn’t going all that bad.

Then, Pasadena First Baptist outscored the host Sharks 19-0 in the second half. What had been a tightly contested game the previous two meetings turned into a rout Friday night as the Sharks battled late-summer cramps without much depth on their roster. The Sharks do have 22 players, their largest number in three years.

“We have the numbers, but we really don’t have the numbers if that makes sense,” coach Jason Thibodeaux said. “We’re trying to put the best on the field, and most of them are playing both sides of the field.”

The extended playing time for most of Sabine Pass’ players led to some attrition on Week 1, although Thibodeaux reported no injuries. Thibodeaux said he’ll have the Sharks hydrated much better for game days.

“We didn’t think the cramps would set in as much as they thought,” he said. “We scrambled around and were trying to put these kids in the best possible situation to win. We have two or three backups, but not one for every position.”

First Baptist, for its part, also returned with a wealth of experience in the form of nine returning starters on each side of the ball, according to Thibodeaux.

The Sharks will try again for their first victory since Oct. 13, 2017, but they’ll have to achieve it in Houston against Lutheran North, a TAPPS Division III District 4 team that is starting its season Friday. The Lions won the last meeting 21-13 on Sept. 11, 2015, in Houston, during the Sharks’ 0-10 season.

“The last time we played them was 2015, so they’ve changed a lot,” Thibodeaux said. “I know they run the Spread. They’re going to run the ball. This week’s practice is nothing but pass coverage.”

That and keeping the Sharks positive.

“They’re down, but we’re going to watch film and praise them for the things they did well and correct the things we didn’t do well,” Thibodeaux said. “I’ve got to keep their morale up.”