Back in the game: Kade Scott produces in return to Bulldogs’ lineup 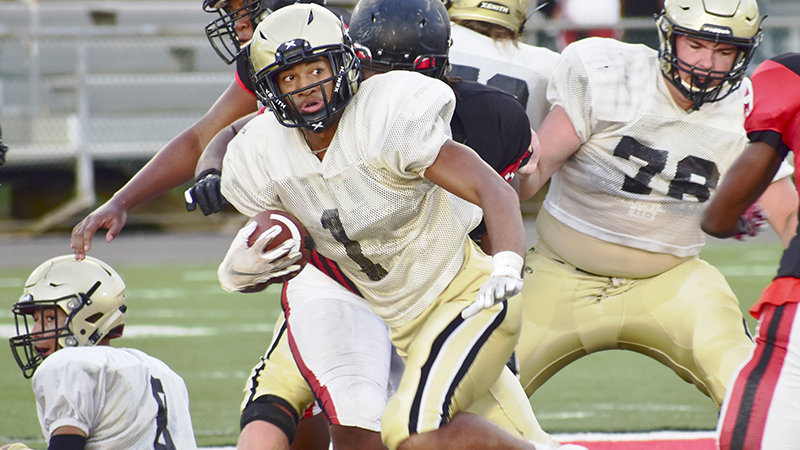 Kade Scott (1) of Nederland, shown in an Aug. 22 scrimmage at Memorial, ran and caught for a touchdown each against West Orange-Stark on Aug. 30. Scott’s game jersey number is 5. (I.C. Murrell/The News) 8-22-19

Seven months after resuming workouts, the junior running back proved he could handle a big load.

“I’m already used to it,” Scott said. “It’s a good experience to come out with a new team and play West Orange [Stark] again.”

That’s what Scott did in 2018, making his mark early and often as the Bulldogs started 9-0 by the time he was injured. But coming off something that required surgery, Scott was determined to not miss a step and scored two touchdowns, only for West Orange-Stark to come away with a 21-20 win at Bulldog Stadium. 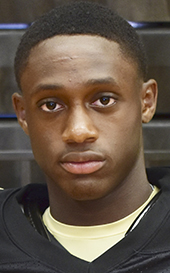 Still, his classmate Josh Mazyck was happy to have Scott in the backfield again.

“It felt good,” said Mazyck, who rushed 17 times for 122 yards, including a 39-yard touchdown scamper. “Both of the backs are back, basically. We’re both back from injuries and we’re rolling good. We’re going to have a great season.”

Scott had 11 carries for 53 yards and a touchdown with a long of 9 yards. He also caught a 3-yard touchdown pass.

Bulldogs coach Monte Barrow has Scott playing a different role in “parts of the game” from last season, when his downhill style of play helped him total more than 900 yards rushing.

“Asking him to go up in there and be a guy who can block, sometimes like a fullback will do, I thought he responded real well to that, along with running the football,” Barrow said. “He’s back to what he was doing last year and running hard and getting the tough yards.”

Barrow doesn’t have Scott or Mazyck, who battled injuries to both his ankles late last year, set on a limited number of carries, nor is he worried who gets more touches.

“I don’t chart it on the field as far as how many [one of them] gets and how many [the other] gets,” Barrow said. “I know they were both in double digits the other night in carries. But, we’ve always been [about] what’s working that game. We’re not about, who’s the leading rusher in the district? It’s what can we do to have one more point than the other team that night.”

Mazyck said getting past West Orange-Stark’s defensive line and linebackers was no easy task.

That’s what he and Scott plan to do when they visit Beaumont United on Thursday night. The Timberwolves thrashed Houston St. Pius X 53-6 on Friday.

“They’ve got a lot of speed on their team,” he said. “They’ve got a good d-line. I feel like we’re going to go out there and do what we do.