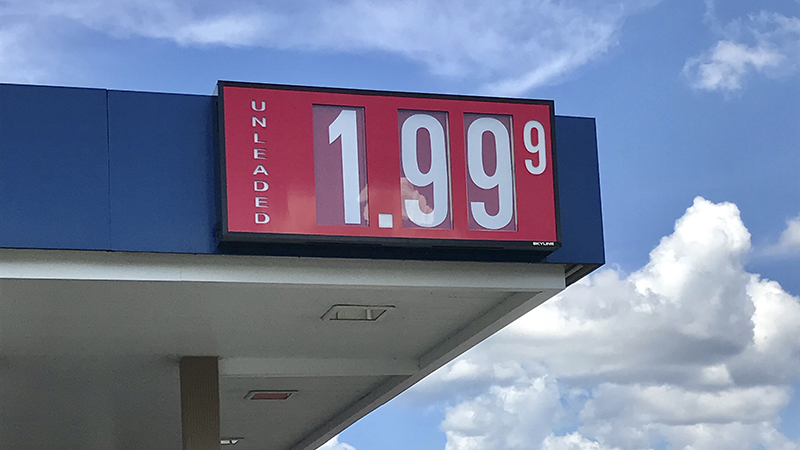 Murphy USA was among those who broke the $2 per gallon price barrier over the holiday weekend. (Ken Stickney/The News)

At least three Mid or South County gas stations dipped below the $2 per gallon mark for unleaded regular gas Monday, reflecting decreasing prices in this part of Jefferson County with summer’s last holiday behind us.

Murphy USA on Highway 69 and Sunoco at Ninth and Jimmy Johnson Boulevard in Port Arthur and Race Way on Highway 365 in Nederland were all selling gas at $1.99 a gallon Monday afternoon.

They by far outdistanced most low gas prices in the area.

Murphy USA in Palmhurst had the lowest per gallon price Monday afternoon at $1.90.

Consumer website GasBuddy.com had the average price for a gallon of gas at $2.25 in Texas on Monday afternoon. Prices varied around the state at mid-afternoon: $2.09 in the Rio Grande Valley, $2.15 in Amarillo, $2.37 in El Paso and $2.50 in Midland Odessa.

Patrick DeHaan of GasBuddy predicted last week that Labor Day prices would be lower than last year — perhaps the third-lowest of the last decade — with an average price of around $2.55 a gallon.

He suggested, too, with Labor Day nearing, that on average some people were putting more “labor” into paying the annual cost of filling their tank. For example, Nevada drivers were working 107.7 hours a year to pay for gasoline. In Massachusetts, where average prices for gas were high — but so are wages — the average driver was working 66.8 hours a year to pay for his or her gas.

While some Texans — count us in in Jefferson County — were seeing gas prices dip below $2 this week, GasBuddy says some 10,000 gas stations will offer gasoline for less than $2 by Thanksgiving.